If Bill Cosby really wants to challenge the rough edges of young, black hip-hop culture, he’s going to have to come up with more appealing films than Fat Albert, this new feature-length adaptation of his popular TV show. The movie is toothless and uninspired, and as directed by veteran filmmaker Joel Zwick (My Big Fat Greek Wedding), the film is a disgracefully shoddy affair. The most surprising thing about Fat Albert is that the animated TV show has been transposed into a mostly live-action film. It begins when Fat Albert’s gang (a motley group of playmates modeled on characters established in Cosby’s stand-up act) travel from their animated junkyard haunts through a TV set and into the North Philadelphia living room of Doris (Pratt), a lonely adolescent girl whom Albert (Thompson) wants to help. Most of the gang is there: Mushmouth, Dumb Donald, Old Weird Harold, and so on. Surprisingly no one in Philadelphia recognizes these Seventies TV stars, even though a poster for the show hangs in a video-store window on the corner. Harold falls for Doris’ foster sister and wants to hang around and maybe remodel himself as Big Al instead of Fat Albert. However, the boys’ color starts fading in the real world and they have to hop back into the TV set before they become completely desaturated. Albert, in his usual problem-solving mode, hands out lots of common-sense advice about self-esteem and other issues, but even he has to turn to Cosby (who shows up in the flesh) for advice about Albert’s to-stay-or-go dilemma. Thompson (Saturday Night Live, All That) practically channels Cosby in his performance, and it is the one decent aspect of the movie. In his fat suit and primary-colored wardrobe, it is almost possible to believe in Albert as a cartoon come to life. However, nothing about the rest of the movie has a shred of believability, style, or heart. Its messages are innocuous and may hold the attention of the littlest viewers, but older audience members may find themselves repulsed by their nostalgia. (Opens Saturday.) 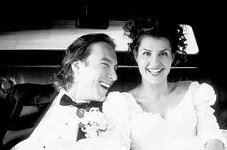 My Big Fat Greek Wedding
How can you not love a film that revolves around a dingy Greek restaurant called “Dancing Zorba's?” Impossible, I know, but that's only one tiny ...