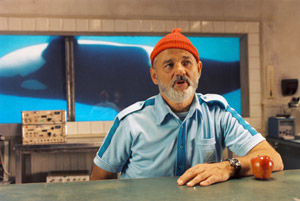 The Life Aquatic With Steve Zissou

Even Wes Anderson's most ardent fans – and I count myself one of them – might scratch their heads at his latest picture, wondering just how to process this fantastical tale of the Jacques Cousteau-like oceanographer Steve Zissou (Murray) and his quest to hunt down the mythic jaguar shark that swallowed his best friend whole. But I think Anderson and his co-writer Noah Baumbach have left little signposts for the audience; for me it was right around the time Zissou's ship, The Belafonte, was attacked by pirates (yes, pirates!) that the truly sublime silliness of the thing really registered, and I realized what we're dealing with here is Anderson's purest comedy to date. Will I tuck into this one late at night when I'm feeling heartachy and laid low, like I do with Anderson's The Royal Tenenbaums and Rushmore? I suspect not. The Life Aquatic can't tightrope comedy and tragedy, hilarity and pathos, like those two films do – but I'm not sure that's even Anderson's aim. His primary concern here appears to be the funneling of his impressive budget (his biggest to date) into eye-popping imagery, like the invented water animals (care of The Nightmare Before Christmas' Henry Selick) and the life-sized model of The Belafonte. The camera swirls – or should I say showboats? – from room to room, level to level on the ship; it's neat, all right, but it's also gratuitous, and is emblematic of Anderson's tendency here to sacrifice the story to whatever new gadget or cheeky sight gag he has on hand. Then again, there's little story to speak of: In addition to the half-hearted search for the jaguar shark, there is the ostensible heart of the film, the arrival of Steve's long-lost son, Ned Plimpton (Wilson, with an awful Southern accent and even worse moustache). Here (and only here) does the film seem to grasp at sincerity, in the attempts by blustering Steve and do-gooder Ned to forge a relationship. This business of absent fathers has been covered before, and better, by Anderson, but it doesn't get in the way of the real pleasure of the piece, which is in the completely nutter messes the crew of The Belafonte repeatedly lands itself into. That crew – or "pack of strays," as Steve calls them, not exactly lovingly – is a motley assortment bound by matching red beanies and a selfless love for Steve's often harebrained vision: They include the German Klaus (a marvelous Dafoe), threatened by what he considers Ned's rival bid for Steve's love; Pelé (Jorge, a Brazilian pop star), who strums his guitar on deck and croons Bowie tunes in Portuguese; Bill (Cort), the "bond company stooge"; and a raft of nameless, unpaid interns. It's a boys' club, through and through; the film itself is, quite charmingly, something of a pop-eyed boy's fantasy of adventure on the high seas. (To further the male adolescent theory: Anderson continues to either idealize or ignore his female characters, and to take a weirdly chaste approach to male/female bedroom relations – all the more criminal considering he's got dead-sexy actresses like Blanchett and a blue-streaked Huston at his disposal.) Out of this gosh-wow cast, Murray is, as ever, the standout, fully committing to Zissou's little Speedo trunks and alarming egomania. He won't get the elusive Oscar for this one – for all its visual majesty, The Life Aquatic is too slight – but let's hope he continues his collaboration with Anderson. I'm eager to see what Anderson might achieve with his muse when he strips away some of the busyness and shrinks the parameters of his playground. Until then, we've got the funny, bewildering, giddy spectacle of The Life Aquatic. I wouldn't wish it away for the world.