"If you are interested in stories with happy endings, you would be better off watching some other movie," warns our narrator, Lemony Snicket (voiced by Jude Law and seen only in silhouette). "In this movie," he continues gravely, "not only is there no happy ending, there is no happy beginning and very few happy things in the middle." These words are transposed near verbatim from page to screen in director Brad Silberling’s spirited adaptation of the first three books in Daniel Handler’s hugely popular Lemony Snicket series. Comparisons to Harry Potter, that other recent tsunamic children’s series, are inevitable; whereas it took the HP movie franchise three tries (and a fresh director) to get it right, Silberling bangs it out of the park at first bat. Along with screenwriter Robert Gordon (who wisely preserves whole chunks of Handler’s sly, prune-faced text), Silberling mostly succeeds in re-creating the novels’ distinct tone of dark, darker, darkest. There’s no sunnying up the grim premise of the Snicket series: It begins with a fire that destroys the home and parents of the three exceptional Baudelaire children: the eldest, Violet (Browning), an inventor; Klaus (Aiken), a voracious reader; and Sunny (Kara and Shelby Hoffman), a babbling infant whose most distinct talent is to chew through just about anything (which makes for a few cheeky sight gags; the film also enjoys some of its heartier laughs by providing English subtitles to Sunny’s seeming gibberish). The children, quickly orphaned, are willed over to the sinister Count Olaf (Carrey), a wannabe actor with designs on the Baudelaire fortune; the film then ambles through several of Olaf’s attempts to snare their inheritance. (Only in the film’s final confrontation does the script’s episodic nature feel hurried and half-finished.) As in all Jim Carrey’s comic creations, the man occasionally pokes through the skin of the character(s) – in addition to Count Olaf, Carrey takes on the guise of a peg-legged sea captain and a fusty reptile expert. Carrey is a bit of a conundrum: He’s the best and worst thing about Lemony Snicket. Creeping around in Olaf’s wind-tunnel shock of hair, pawing the air with his bird-claw hands, Carrey and his physical comedy prowess produce moments of shocking hilarity. But this manic flailing for a laugh – a laugh that, more often than not, Carrey will nail – also means that Olaf has lost much of his menace. He still does extremely bad deeds, but we all know that’s Jim Carrey under the prosthetic nose. That may bring comfort to younger viewers, but I suspect it will disappoint the books’ older fanbase, who’d been hoping for a screen villain that didn’t mellow the macabreness of the book version. (They might also sniff at the film’s occasional, predictable dip into treacle.) That’s the purist argument. The rest of me thrilled at Carrey’s nutty reinvention of the Count. More conventionally cast, but no less impressive, are Browning and Aiken, who anchor the film with their big eyes, Dickensian plight, and contemporary pluck. The biggest huzzahs, however, must go to production designer Rich Heinrichs and art directors John Dexter and Martin Whist, who have worked with Tim Burton in the past. With respectful nods to Edward Gorey and Charles Addams, the design teams produce one electrifying locale after another, from a fire-gutted Victorian manse to a sun-drenched reptile room to a crazy-angled clifftop house where a simple doorknob becomes a very dangerous thing, indeed. There, in the visuals, is the real menace, while Count Olaf, defanged, pops in for blessed bits of comic relief. A grammatical error has been corrected since the review's original publication date. 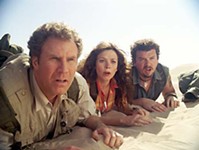 Land of the Lost
Will Ferrell's remake of the beloved Sid and Marty Krofft TV show lacks virtually everything that made the original series so memorable.