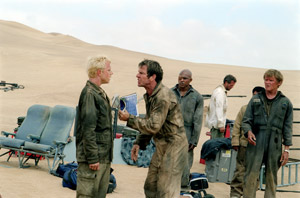 Flight of the Phoenix

Flight of the Phoenix begins with the kind of explosive, nail-gnawing cinematic airplane crash pioneered by the 1993 rugby players-cum-culinary outsiders epic Alive, and while this remake of Robert Aldrich’s 1965 adventure film of the same name lacks both the hoary tang of the original and late-career Jimmy Stewart, it still manages to stick surprisingly close to its predecessor in both tone and tenor. Quaid plays Frank Towns, pilot of an aging cargo plane sent to pick up a small group of oil-rig workers in Outer Mongolia. On their way back to civilization, Towns and co-pilot A.J. (Gibson) encounter a monstrously large CGI sandstorm straight out of The Mummy and unwisely attempt to pilot their way over and then through it, which results in a disastrous ditching in the Gobi Desert. Stranded 300 miles off course with no working radio, little chance of rescue, and barely enough food (peaches and hearts of palm!) and water to last a month, the motley crew includes riggers, airmen, and one unknown in the form of Ribisi’s bespectacled Elliott, a pompous aviation engineer who ultimately decrees that their only salvation lies in building a new plane out of the wreckage of the old. Much to my dismay, no one mutters the requisite, "That’s so crazy it just might work!" line, but nearly every other cliché in the Boy’s Big Book o’ Adventure is mined for all its worth. (Although, in a welcome divergence from tradition, Otto’s tough-gal character isn’t made to hook up with any of the strapping and frequently shirtless menfolk.) The original 1966 film (held together by powerful work from Stewart as Towns and Richard Attenborough as his co-pilot) still seems like Hitchcock’s Lifeboat in the desert, but Moore’s (Behind Enemy Lines) film feels more like a grueling episode of a reality TV show – Survivor in the Gobi, maybe, or Worst Case Scenario goes Mongol. That has as much to do with the film’s script, courtesy of Edward Burns (The Brothers McMullen) and Scott Frank (Minority Report), which includes not one but two show-stopping "hopes and dreams" speeches, neither one of which makes you long for anything but a quick demise for those doing the speechifying. Quaid in particular seems ill-suited to his role, sporting far too many cocky grins for his own good, while Laurie wanders around suitably stiff-lipped and rapper Sticky Fingaz hovers in the background, presumably waiting for his film career to take off. Ribisi’s Elliott is the film’s linchpin, however. Sporting a blond wig and the sort of shrill vocal mannerisms that fairly cry, "Bad nerd!" his character’s presence in the film is never adequately explained, and the excuse given – "He just showed up one day" at the hinterlands oil station – is perplexing. Moore and company don’t make much of it and presumably feel we shouldn’t either, but Ribisi’s character is so intrinsic to the plotting that the lack of background is downright bizarre. It all made sense in Aldrich’s film, but here, strutting about like a metrosexual martinet on a hissy jag, it’s just unnerving and strange. The whole film, in fact, is more than a tad surreal, shot through with images of flowing sand dunes and the sense that all is not what it seems. By the end, though, it’s all too much what it seems, a literalist adventure with a socko Twilight Zone twist that’s finally too little, too late. 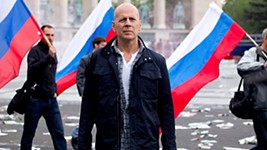 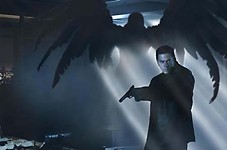