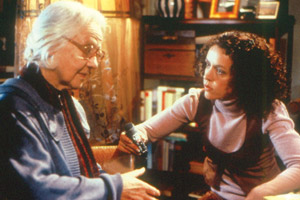 With this film, German director von Trotta tries to put a human face on a historic event known as Rosenstrasse, which in 1943 was one of the few public, and moreover, successful citizen protests against the power of the Nazi regime. Named for the street in Berlin that housed a Jewish community center, Rosenstrasse became a sudden collection center for Jewish spouses of Aryan-born citizens, who were gathered there to presumably await transfer to the concentration camps. Most of the detainees were men, and thus the cluster of people who stood daily outside the makeshift prison to await news or the release of their husbands were women. Most of the detainees were eventually released, and the incident has been discussed in recent years as a rare example of German resistance to the Third Reich. One suspects that von Trotta, whose films throughout the decades have paid special attention to women’s issues, views Rosenstrasse as an unheralded example of the power of women working together. Yet, not only does von Trotta fail to capture the sway and drama of the Rosenstrasse resistance in this movie, she also muddies the human fictional drama she creates as our passageway through these events. As the film clunkily unfolds, we’re left to wonder where von Trotta’s heretofore proven skills in telling feminist narratives (The Lost Honor of Katharina Blum, Marianne and Juliane) have gone. A young woman, Hannah Weinstein (Schrader), who is engaged to a non-Jew from South America, is surprised by her mother Ruth’s sudden adoption of the religious rituals of mourning after the death of her husband. The family had always been raised secularly in New York City, thus her mother’s disapproval of her marriage partner on the basis of his religion also perplexes Hannah. Although her mother never discussed her childhood in Germany, Hannah is given a clue by another mourning relative about the people who raised Ruth. Next thing, Hannah is on a plane to seek out this missing link, but when she discovers her mother’s protector Lena (Schade in present day, Riemann in younger flashbacks), Hannah hides her true motives and poses as a research historian. Through long afternoon sessions, the story of Rosenstrasse and young Ruth’s orphaning is relayed, although the story has little dramatic or emotional resonance. By the end of the movie, Hannah is satisfied with her discoveries, even though the audience will not be. Viewers are more likely to wonder how the telling of this story resolves anything in the present-day characters’ lives. Rosenstrasse is not uninteresting, and it is very nicely performed, although you’ll strain to learn from the movie the history on which it is based and struggle futilely to get inside the motivations of its characters. 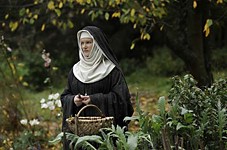