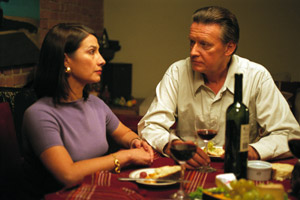 A Mexican and Canadian production, A Silent Love puts an unusual spin on some of the clichés of the romantic comedy. A well-written script (by Paulina Robles and Argentinean newcomer Hidalgo), thoughtful direction, and sensitive performances by all the key players breathe fresh air into this culture-clash romance and help the movie break with the form’s overfamiliarity. We have seen movies before about mail-order brides, cultural collisions, and romantic triangles, but rarely are they handled and resolved with such deft originality. Norman (Burton) is a lonely, middle-aged professor of silent film in Montreal, who is matched through an Internet agency with Gladys (Bauche, best known for her work in Amores Perros), a beautiful, vibrant, and impulsive woman from Mexico. He flies to Mexico to meet Gladys and propose marriage and the start of a new life together in Montreal, but Gladys has one condition: Her mother Fernanda (Salazar) must come along. A kindly man, Norman agrees readily. Even though we know that a live-in mother-in-law means trouble for any beginning marriage, takes this trouble into a new direction. Also unusual is the character of Gladys, who is in search of love and a sense of destiny rather than a green card. She is not looking to escape her life in Mexico or gain wealth: All she wants is a loving husband. Although Norman and Gladys behave lovingly toward each other in Montreal, they slowly discover that this is not the same thing as love. As depicted here, Montreal must be the melting pot of the Americas, as we see Norman’s African-born colleague and the sushi bar where Gladys seeks work develop into subplots. The whole theme of the importance of gestures to the understanding of silent film echoes as Gladys and Fernanda buzz away to each other in Spanish while Norman attentively watches. A Silent Love, which debuted at the 2004 Sundance Film Festival, subverts stereotypes with its gentle humor. 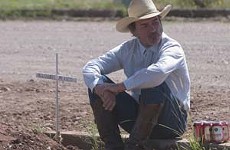 The Three Burials of Melquiades Estrada
Tommy Lee Jones has made a modern Western in the culturally askew tradition of Peckinpah, Huston, and Boetticher. Don't let the near-impossible-to-remember title keep you away from this singular and slightly surreal scorcher.