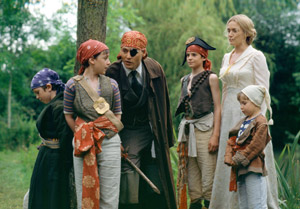 The act of make-believe is in short supply these days. With technology filling in all of the blanks, there’s literally nothing left to the imagination anymore. Finding Neverland takes you back to a time in which people – children, in particular – still created whole worlds in their heads, inventing characters and situations as far away as their flights of fancy would take them. Based on actual events, the film focuses on the special relationship between British playwright J. M. Barrie and the Llewelyn Davies family, imagining how they inspired Barrie to create the stage work for which he is best known today, Peter Pan. Like his most famous character, the Barrie presented here refuses to fully join the world of adults; he would much rather play cowboys and Indians with the four fatherless Llewelyn Davies boys than deal with his loveless marriage or mull over his latest theatrical flop. As he spends more time with the boys and their unconventional widowed mother, however, Victorian tongues in London begin to wag, suggesting that Barrie’s association with the family is inappropriate on a variety of levels. (The rumor that the playwright’s interest in the children was something more than paternal brings to mind the legal troubles of our present-day, self-proclaimed Peter Pan.) While the melodramatic elements of Finding Neverland are interesting but predictable (be forewarned: This really isn’t a film for kids, but rather one for the kids in adults), its artistic merit and entertainment value derive from how the film links its narrative to Barrie’s imagining of a world in which sprinkled fairy dust empowers children to fly and live out an adventure beyond their wildest dreams. The imagery that inspires him – pajama-clad boys jumping on their beds while pillow-fighting; a knitting hook in the hand of a threatening character; the sprite-like clothing of little Peter Llewelyn Davies – ultimately find themselves in the Darling children, Captain Hook, and the titular boy who adamantly refused to grow up. Also, the film posits that when confronted with the possibility of a loved one’s demise, Barrie incorporated his hopes and fears into the scene in Peter Pan in which a dying Tinkerbell is revived by our belief in fairies. The extent to which the Llewelyn Davies family actually served as Barrie’s muse is subject to speculation – he was an enigmatic man about which little is known – but this plot conceit is the enchanting heart and soul of the movie. (Anyone familiar with the tale of Peter Pan and his Lost Boys will undoubtedly smile in recognition when Finding Neverland links its storyline elements to the tale of Peter Pan. As corny as it may sound, the movie really appeals to your inner child.) As usual, Depp is wonderful as Barrie, even when his Scottish accent disappears, though the film is somewhat stingy in providing more insight into what made this mysterious man tick. The juxtaposition of the more whimsical sequences in the film and those grounded in real life is a little jarring at times, but director Forster (Monster’s Ball) can’t be fairly faulted for that, given the nature of the script (by David Magee from Allan Knee’s play). All in all, Finding Neverland is an adeptly realized celebration of the wonder of the imagination, a theme expertly captured in the film’s depiction of the opening night of Peter Pan on the London stage, in which grown-up and child alike find themselves thoroughly enchanted by the theatrical experience. Watching them respond to the magic of Barrie’s play is bound to make anyone believe. 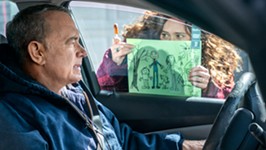