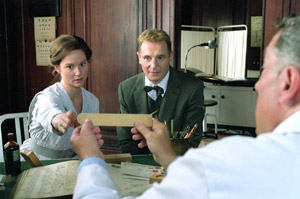 In considering a marriage proposal, Clara "Mac" McMillen (Linney) admits to her suitor, the socially and sexually inexperienced Dr. Kinsey (Neeson), that "I find you a little churchy." Linney’s matter-of-fact delivery makes the moment a howl, but I wonder if there isn’t something to her appraisal. Bill Condon’s biopic about Alfred Kinsey, the controversial sex researcher whose 1949 book, Sexual Behavior in the Human Male, significantly raised the nation’s blood pressure, is in itself vaguely "churchy" – not in a religious sense, but in a decorous, starched-collar sort of way. The film begins promisingly, with black-and-white footage of Kinsey coaching his graduate students on how to administer a sex questionnaire. Kinsey himself acts as a test subject for them, and this device – of Kinsey, in direct camera address, candidly recounting his emotional and sexual history – is used throughout the film. His answers serve as the starting points for biographical flashbacks – there’s young Alfred cowering from his fundamentalist preacher father (Lithgow); there he is having an ambiguously gay moment with another Boy Scout – but these detours sometimes feel more functional than inspired. However, the picture improves immeasurably with the exit of one player, the wildly overacting John Lithgow, and the entrance of another, Laura Linney. She brings dignity, complexity, and – best yet – humor to the long-suffering-wife archetype (she must suffer a husband who draws upon their own sexual practices for his academic research as well as has an affair with a man and basically bullies her into agreeing to an open relationship). Sarsgaard, as Kinsey’s assistant and sometime-lover, does good work, too, but they both, perhaps inevitably, take a backseat to the titular character. Kinsey, as envisioned by Neeson and writer/director Condon, is kept at a remove, and the film tends to enshrine the scientist and his life’s work at the expense of a more rigorous – and therefore more profound – scrutiny. A case could be made that Kinsey’s dedication to his research bordered on mania – at one point, he pricks his own foreskin just to see how it feels – and that is exactly the kind of knotty, nonglossy detail the film could use more of. Alas, Kinsey is too tasteful by half, and while it may have its gentle charms, it never thrills.