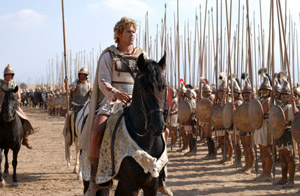 A historical epic in search of a tone it never quite conquers, Oliver Stone’s three-hour labor of love is simply laborious, a ponderous behemoth of a film that favors breathy exposition over the more battle-savvy aspects of the young king who by the age of 32 ruled virtually all of the known world. There’s been much talk of the film’s accurate portrayal of the Macedonian Alexander (Farrell) as a bisexual naïf hurled into conflict by the forces that surrounded him, but the film focuses so much on the quasi-Shakespearean machinations of Alexander’s serpent-loving mother Olympias (Jolie, sporting a Russian-esque accent that makes you wonder if the greatest threat to her son’s rule might just be Moose and Squirrel), that Alexander himself comes off as the king of indecision. His lifelong love affair with childhood friend Hephaestion (Leto); his marriage to his first wife, Roxane (Dawson), a Persian; his ascension to the Greek throne; and his many strategic triumphs all take a back seat to Stone’s penchant for longwinded melodramatics. It’s never a good sign when a film starts off with a scene set on a painfully obvious interior soundstage, but that’s just what happens here, as Hopkins’ Ptolemy recounts his days with the boy king to his long-lashed scribes. The set, with its chintzy-looking art direction, might have been acceptable had this been a Steve Reeves swords ’n’ sandals skirmisher, but Stone is clearly aiming higher, and falling farther. The film’s two major scenes of military conflict – the battle of Gaugamela, where Alexander’s force of 40,000 bested the Persian King Dariussd III’s 250,000-strong army, and a third-act forest routing in India – are given short shrift and photographed in that jittery "you are there" un-StediCam-style that renders the action impenetrable. There is one fine moment in which Stone’s camera soars aloft with a bird of prey as it swoops over the battleground, providing one of the film’s only moments of actual clarity. But that’s over in a moment and it’s back to the film’s single greatest miscalculation: Colin Farrell as Alexander. With his hair dyed blonde and little effort made to conceal his Irish brogue, Farrell simply isn’t believable as Alexander the Great – he’s more Alexander the Cute – and his prebattle speechifying before his troops, clearly meant to recall Kenneth Branagh’s electrifying Henry V prebloodshed pep talk, comes off as laughably out of place. Farrell is trying hard to make the character his own, but Stone’s script (written with Christopher Kyle and Laeta Kalogridis) does him no favors, and instead has this presumed demigod making googly eyes at Leto whenever he gets the chance. Only Kilmer, as the one-eyed Philip, makes much of an impression, and his defining characteristic is bellicose inebriation. Within Stone’s oeuvre, Alexander ranks as his most exasperatingly off-target film, completely lacking the director’s mordant, stick-in-the-eye humor (so apparent in Natural Born Killers and Salvador), his love of Rubik’s Cube-esque conspiracy (à la JFK), and even his able hand with battlefield glory and its blackened flipside (as in Platoon). It is, in a word, boring, and that’s the most un-Oliver Stone adjective I can think of.