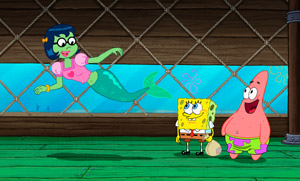 Once again the title pretty much says it all. It's SpongeBob. It's a movie. There's nothing you wouldn't expect (with the possible exception of live-action Hasselhoff) and everything you would: pernicious meddling by next-door nemesis Squidward (Bumpass); musical hijinks at Goofy Goober's Ice Cream Party Boat; and little bits of wry wit (and a decent soundtrack, with Wilco, Ween, the Flaming Lips, and much more, thanks to music supervisor Karyn Rachtman) to keep adult viewers from clawing out their eyes. Is it good? Is it bad? Does it matter either way? Parents, prepare to be steamrolled by the SpongeBob merchandising juggernaut. Movies like this defy comment. They just soak up box-office clams as powerfully as our "absorbent and yellow and porous" hero. It's all relatively painless, and you may well appreciate the occasional yuks (a satirical musical number called "Now That We're Men" is something of a standout), but the experience will evaporate entirely on the ride home. Terribly young viewers will probably balk at some of the content (witness "Dennis the Killer," a scary hit man voiced by Baldwin), and the jokes about public radio will fly over their wee heads. Yet if nautical nonsense is what they seek, school-aged kids will probably eat up this SpongeBob like a Goofy Goober Triple Gooberberry Sunrise. But let's not kid: This is another helping of utterly disposable entertainment in an already flooded youth market, and Hollywood can do better. Witness the epic vision, smarts, and old-fashioned movie magic of The Incredibles, which is truly capable of captivating all ages. By comparison, SpongeBob is like panning for nuggets of iron pyrite on a vast and sandy shore. ("Look, everybody! I found a parody of Twisted Sister!") Could it be worse? Absolutely. And if your offspring have Gary the Snail printed on their big-kid underpants from Target (or if you do, and you know who you are) you might as well be grateful to the six writers and storyboarders who've conspired to bring you Johansson slumming as pert and bespectacled mermaid Princess Mindy.