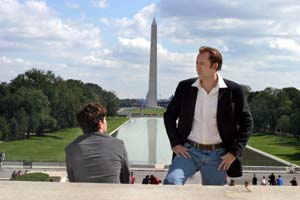 Absurdism taken to a new extreme, this Disney-Michael Bay co-production is loaded to the gills with that producer’s innate love of car chases and errant gunpowder, while maintaining a very Disneyfied (and virtually nonexistent) body count and a gravely silly respect for off-kilter Americana. In the end, it’s the odd casting and unimaginative, workmanlike direction (from the man behind both the Anthony Hopkins potboiler Instinct and Disney’s Jamaican bobsled epic Cool Runnings) that make the painfully overlong National Treasure the exercise in mediocrity it is. Toss in a slice of a conspiracy-minded bestseller The Da Vinci Code and one of the most bombastic scores of the year (courtesy of the usually reliable Trevor Rabin) and you’ve got a recipe for cinematic malaise that leaves your head aching from all the improbabilities, explicit and otherwise, that clutter the exposition-heavy storyline at every hairpin turn. The film opens with a recounting, by sage patriarch Christopher Plummer, of the Gates family history, to which young Benjamin Franklin Gates belongs. The Gates’ progeny have been searching for generations, we are informed, for a fabulous, multibillion-dollar treasure that went missing just after the American Revolution, when its then-guardians, the Founding Fathers (Freemasons all, we’re told), hid it from the British. The ongoing search for the reputed treasure, which was once the property of the ancient Egyptians, later the Knights Templar, and later still the Federalists, has been a thorn in the Gates family craw since time immemorial and has led to the family name becoming synonymous with mild lunacy. So as soon as little B.F. Gates grows up into the nerdish, know-it-all-can’t-wait-to-tell-you Cage, the race for the treasure is on, again. Turns out there’s a series of clues on the back of the Declaration of Independence, and so, naturally, Gates and his hacker pal Riley (Bartha, late of Gigli) must steal and save the famed document from the National Archives before it’s stolen and destroyed by former treasure-hunting partner Ian Howe (Bean), a latter-day Redcoat with more Benjamins than Franklin on his mind. From this point on, the film devolves into a series of cryptic action scenes set to the backdrop of various and sundry Washington D.C. monuments, as well as the North Pole, where the pair discover a sunken ship buried beneath the ice while using a couple of old-school metal detectors and a pair of oversized SnowCats, and a ruinous lair beneath the intersection of Wall Street and Broadway. Both Voight, as Benjamin Gates’ father, and Harvey Keitel, as the head of the FBI task force assigned to the theft of the Declaration of Independence, put in minor-key appearances, but their presence only serves to bolster the fact that National Treasure, for all its emphatic national history glee (Cage routinely dispenses nuggets of historical wisdom like he’s spitting pumpkin seeds), is an underdone pastiche of Raiders of the Lost Ark and a really tedious high school history class.