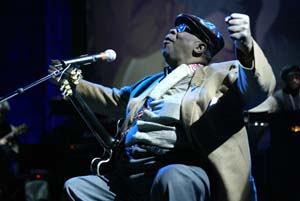 Lightning in a Bottle

As concert films go, this is heady stuff, full immersion in the blues bath via a February 2003 megaconcert at Radio City Music Hall and the director of Training Day, who proves he's still a fine orchestrator of music videos – even if all he has to do this time out is point and shoot. Anything else would be overdoing it when you've got everyone from B.B. King to Bonnie Raitt sharing the stage, and from a clowning Bill Cosby (who guest-schticks alongside Ruth Brown, Mavis Staples, and Natalie Cole as they belt out "Men Are Like Streetcars") to Austinites Jimmie Vaughan and Kim Wilson. Ostensibly a record of one mighty night minus the Rockettes, Fuqua's film goes beyond the mere tag of concert film and achieves something more: It becomes a living history lesson, tracing the evolving sound of the blues from its swampy sharecropping birth below the Mississippi Delta and migration north to Memphis and beyond. Cole is one of the inheritors of that rusty-but-gorgeous mantle, and her gutsy, take-no-prisoners rendition of W.C. Handy's groundbreaking "St. Louis Blues" is powerful stuff. Actually, there's not a clinker among the dozens of performances here – Macy Gray (another kid playing among the adults) does a worthy rendition of "Hound Dog" that puts Elvis' to shame; Honeyboy Edwards' "Gamblin' Man" is a spare, righteous wonder emanating as it does from the mouth of a nonagenarian; and Solomon Burke makes "Down in the Valley" sound nearly as powerful as the run-in with the Klan he describes later in the film. Fuqua is smart to keep his cameras trained, for the most part, on the stage; cinematographer Lisa Rinzler (Pollock) and a platoon of assistants keep things tight and steady, often moving in close enough to see the sweat pop out on the performers' faces while simultaneously offering a sense of the sheer vocal magnitude of the performances. This is the sort of concert film made for high-end home theatre experiences, but you get the feeling, especially when watching clips or hearing snatches of blues performers from days gone by, that it wouldn't matter a jot if you were listening to the sounds on a scratchy old 78 rpm record. "Blues is not a plaything," says slide guitar genius Son House during one the film's several archival interviews. "There ain't but one kind of blues and that's between a male and female in love." True enough, but you could just as easily turn it into a ménage à trois among the singer, his instrument, and the listener: a threesome Fuqua's film pulls off in spades.

Lightning in a Bottle, Antoine Fuqua