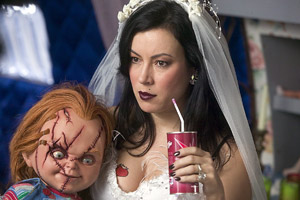 You know you’re watching some sort of bizarre classic when King of Trash John Waters gets half his face burned off by sulfuric acid in the first act. Installment No. 5 in the once-moribund Child’s Play franchise isn’t quite the roller coaster from hell that the series’ last outing (Ronny Yu’s sublimely twisted Bride of Chucky) was, but it’s surely the most engaging, and, dare I say, emotionally honest. Not that the film’s diehard gore fans are looking for a voodoo-inflected metaphor for addictive personality disorder and the resulting chaos it can inflict on an otherwise healthy relationship, but hey, think of this as your bonus cinematic subtext for the week. Chucky (voiced by Brad Dourif), you will recall, is a serial killer trapped in the body of a plastic Good Guys doll, who with his equally entrapped sweetheart, Tiffany (Tilly), scampers about waylaying clueless bystanders and splattering blood all over the grand draperies of life. This outing has the pair meeting their offspring, the appropriately monikered Shitface (Boyd), who since the last film (where he was breach-birthed from his dead mother’s plastic corpse in a cemetery – and you can’t imagine how I’ve longed to someday pen that very sentence) has been trapped in a circus freak show in the UK. After seeing his presumed parentage on the telly, the little scamp airships himself to Los Angeles to reunite with his mom and dad, where a feature film of Chucky’s exploits is being helmed by "director-rapper-hyphenate" Redman. The film-within-a-film stars Tilly as the voice of Tiffany, and she milks both roles for all they’re worth, which, if our currency were self-reflexive ironic horror films, would be a fortune. The deceased Chucky and Tiffany dolls are, of course, promptly resurrected by their bastard offspring, who, as it turns out, isn’t so sure he wants to follow in his family’s bloodstained footsteps. To make matters worse, the kid is non-anatomically correct, which leads to some severe gender issues (à la Brian De Palma’s Dressed to Kill, whose scorer, Pino Donaggio, also does the music duties here) and his rechristening, à la Ed Wood Jr., to Glen/Glenda. It should go without saying that the family that slays together stays together, and so it’s only a matter of time before the reluctant tyke offs his first victim and Redman’s steaming entrails are besmirching his Nikes. Which leads us to the film’s real coup de grâce: its very, very over-the-top gore (courtesy of Tony Gardner), which, even for an R-rated slasher flick, is light-years beyond what you might expect and is cause alone for Fangoria fans to rejoice. Heads roll, bodies are manhandled in ways that would make Torquemada cringe, and love is in the air. Family values, indeed. All this isn’t to say Seed of Chucky is a masterpiece – Mancini’s pacing is leaden compared to Yu’s, and a number of the gags miss their mark – but the film, for all its outrageous dialogue (at one point Glen/Glenda nails a perfect James Dean line reading from Rebel Without a Cause) and special effects, is genuinely inspired silliness of the sort that makes you wonder why the MPAA can’t just relax and have a good time at the movies already. And apparently, for once, they did just that. Saint Ralph
This strange youth dramedy from Canada has a brisk, sunny aplomb.