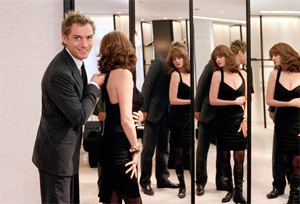 This remake of the 1966 hit, which starred Michael Caine as a Cockney serial seducer, reprises that film’s catchphrase – "What’s it all about?" – both in its tagline and its end-of-the-film musings. But perhaps the more appropriate question to put to this remake would be "What the hell’s the point?" In its study of the titular predatory male, Lewis Gilbert’s original Alfie (adapted by Bill Naughton from his stageplay) brashly took on casual sex and its not so casual aftermath, which included a grim, taboo-busting interlude with a back-alley abortionist. Gilbert’s film became part of the cultural zeitgeist, a film that was terrifically of its time, whereas the new Alfie takes a hard look at … the rise of the metrosexual? Obviously, Alfie reconfigured for a post-AIDS world required some tweaking, some concessions to our, gulp, more enlightened times. Besides moving the nattily dressed chauffeur’s home base from swingin’ London to über-stylish Manhattan, the filmmakers have also attempted to soften around the edges of that notorious misogynist. Alfie’s still a user but not an abuser of women. And no worries: He’ll get his knuckles rapped by film’s end (most satisfyingly, by an older paramour played by the ever-fantastic Susan Sarandon). Alfie is, under Law’s goldilocked, benign guidance, less tramp and more scamp. He’s also the actor’s least interesting role to date. Law has had great luck in the supporting role, nicking pictures from their more celebrated leads (The Talented Mr. Ripley, Road to Perdition). But Law, onscreen throughout and often addressing the camera directly, overstays his welcome in Alfie, largely by playing too cute ... which is exactly how the script would have him play it. Relying on stale, gender-based prosaisms almost as bad as the great toilet-seat debate, the screenplay (by Shyer and former sitcom writer Elaine Pope) has none of the original’s menace, no hint of violence or pathology pricking just under Alfie’s nails. (For a truer heir to the original Alfie, see Dylan Kidd’s cagey Roger Dodger.) Of course, the 2004 version isn’t all about Alfie. It’s also about the baffling (and unfunny) stereotyping of Alfie’s Asian employer and fey German doctor. And it’s about the elevation of style (Blue filters! Sexy Vespas! Arty graffiti!) over substance. And it’s about the disposability – not just Alfie’s but the film’s – of its women characters. And, perhaps, it’s about watching the daringness of an idea, of an institution, go fizzle in the face of pink Gucci dress shirts and Jude Law’s manly, mannerly weeping. The Affair of the Necklace
Not reviewed at press time. Hilary Swank follows up her Oscar-winning performance as the transgendered lead in Boys Don't Cry with a complete about-face. Here ...