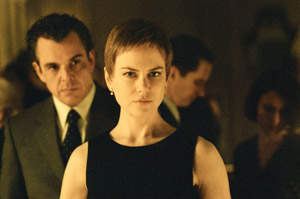 It’s a spooky movie without anything really scary in it, a ghost story without any spirits, a romance that displays scant affection, a reincarnation tale that never uses that particular word nor engages in anything terribly transcendental. Despite what seems like the best intentions, Jonathan Glazer’s Birth has gone awry. His film feels enervated and lifeless, as though fearful to push too hard in any one direction and, as a result, shortchanging all the film’s rich possibilities. It’s not the kind of thing one might have expected following the director’s flashy feature-filmmaking debut with Sexy Beast. Yet maybe that’s the way Glazer wanted it, and the film’s lack of vitality is merely a miscalculation. One thing he did not miscalculate is casting Nicole Kidman in the lead. So much of Birth occurs in quiet or near-silence that the impact of the movie is conveyed through the heroine’s expressions. Kidman’s face (framed by the cropped hairdo that’s pointedly reminiscent of Mia Farrow in that other New York-set supernatural tale Rosemary’s Baby) registers a remarkable range of emotions, often within the confines of a single take (best seen in the film’s several-minutes-long opera sequence). Granted, Birth’s storyline about a woman’s young husband dying suddenly and reappearing years later in the body of a 10-year-old boy is touchy material. Many viewers will be coming primarily to see the much-buzzed-about scene in which Kidman as Anna shares her bathtub with young Sean (Bright). It’s a credit to Kidman’s skill that there is nothing salacious about the scene, nor is there anything indecent about another scene in which she discusses her "needs" over ice cream with 10-year-old Sean. The supporting cast – which includes Lauren Bacall expressing disbelief in her haughty clip, Danny Huston (last seen sucking the life out of Silver City), and Anne Heche deftly providing the prosaic answers to the movie’s largely unasked metaphysical questions – provide little relief from Birth’s stuffy atmosphere. Although co-written by Glazer with Milo Addica (Monster’s Ball co-screenwriter) and Jean-Claude Carrière (who collaborated on most of Luis Buñuel’s French scripts), Birth never creatively engages the metaphysical questions the story inherently raises. Perhaps Birth needed a little longer to gestate.

Under the Skin
Scarlett Johansson is the blank alien who prowls for earthmen in this spare and disorienting genre smash-up.

Sexy Beast
A boulder, a gun, a bank heist … it's hard, at first, to tell where Sexy Beast is going. The boulder goes in the pool, ...