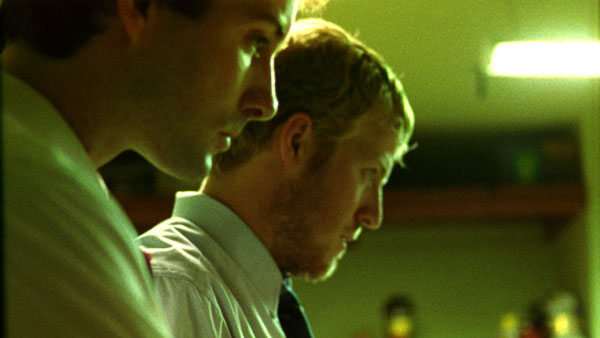 Winner of the Dramatic Grand Jury prize at the 2004 Sundance Film Festival, Primer is indeed a unique film that stands out from the crowd. With a plot that hinges on physics and metaphysics, the film often seems the work of a scientist rather than a filmmaker. Yet this is obviously not true since a methodical process has also been applied to the filmmaking, and not just the science. Reportedly made for $7,000 in Dallas, Texas, Primer actually looks like it was made on the cheap, but with a rigorous visual and narrative process. The look is fitting to the movie’s subject matter, which observes the invention process of a couple of young engineers, who work out of one’s home garage after putting in full work weeks at anonymous engineering firms. The viewer gets the feeling that this is a process happening in garages across America: the young scientists’ urge to "discover something, anything, to set themselves apart from the pack." The film’s early scenes that show the team’s combative and competitive streaks, can-do spirit, and low-rent, makeshift mechanics bear the ring of truth. Eventually, Abe (Sullivan) and Aaron (Carruth, who also wrote and directed Primer) discover the makings of a time machine that they experiment with further. Primer is either as complicated or as simple as the viewer wants. The film is possible to enjoy without following all the science involved. Often it seems as if Carruth is willfully trying to make his story as obtuse as possible. For instance, there is no narrative explication of the events or the setup, which seems to indicate that Carruth wants to plop viewers into the milieu to fend for themselves. The time travel leads to plot complications that raise philosophical questions about what the two men should do with their discovery. Make a killing in stock trades or the lottery, or do something more purposeful? It’s hard to always know what Primer is saying or where it’s heading, but it looks fantastic while it unfolds and you won’t be able to forget what you’ve witnessed. (See interview with Shane Carruth at austinchronicle.com/issues/dispatch/2004-10-22/screens_feature3.html.)

Upstream Color
Shane Carruth's film is arthouse science fiction at its most compelling yet cryptic.