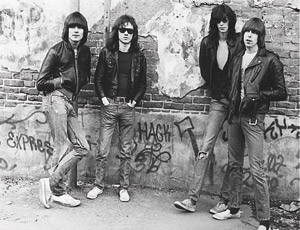 End of the Century: The Story of the Ramones

You can’t help but feel conflicted watching this superb documentary about the seminal New York-based punk rock vanguard, the Ramones. On the one hand, the sheer wealth of rarely seen footage of Joey, Dee Dee, Johnny, and Tommy Ramone (and later Marky and CJ) tearing it up onstage and off is so glorious in all its ripped-Levi’s and black-leather splendor that it’s all you can do to not hurl yourself around the theatre hollering the chorus to "I Wanna Be Sedated" alongside Johnny’s buzzsaw guitar and Joey’s adenoidal yelp. On the other hand, three of the four original members have passed away in the last three years, two to cancer and one (predictably, it was Dee Dee) from a heroin OD, which renders this celebration of the Ramones also something of a wake, albeit one with enough undiluted Lower East Side energy to power a thousand Marshall amps for millennia. Which brings us back to the mystery of how, in 1974, four scruffy Forest Hills ne’er-do-wells who were obsessed with Iggy Pop and the Stooges could coalesce and mutate into the single most influential rock & roll band since the Beatles and manage to stick it out for nearly a quarter-century come hell, high water, and more personality crises than the New York Dolls. These days when listening to FM radio, you’re far more likely to pick up on the sound of the Ramones than the Beatles, actually. As NYC scenester/author Legs McNeil points out in End of the Century, without the existence of these four pinheads, the current musical landscape – awash as it is in punk rock-lite, alt-metal, and a slew of brash young upstarts who owe their everything to the Ramones – and the sounds of our world, car commercials included (as Blondie’s Debbie Harry points out – the movie is thick with gobbets of praise from the band’s contemporaries), would be radically different. They never got their due, it seemed, although they had 21 studio and live albums to their credit by the time they officially disbanded in 1996. The lack of airplay from FM radio drove the impossibly tall, ridiculously thin, and strangely alien singer Joey to distraction. Even their much ballyhooed 1980 sessions with producer extraordinaire and alleged psycho killer Phil Spector amounted to zilch on the FM dial. Do you remember rock & roll radio? Admittedly, it’s tough when the Ramones weren’t played on it at all. (Perhaps that’s for the best – the thought of "Judy Is a Punk" slamming up against "Hotel California" would have likely caused more than a little automotive mayhem for Sunday drivers jamming to KROQ while tooling down the Pacific Coast Highway.) The band’s simple 1-2-3-4 punk rock punch, rock & roll stripped down to the bare necessities, remains as resonantly awe-inspiring as it was in its initial Seventies fusillade, and perhaps more so. Where End of the Century really triumphs, however, is in the film’s exhaustive (and exhausting) detail. The directors have assembled a veritable sonic museum of the band that delves deep into the minds of conservative guitarist Johnny, business-oriented drummer Tommy, and train-wreck Dee Dee, with the shy, quiet Joey only asserting his voice after Johnny stole his girlfriend. (The pair never spoke to each other, willingly, again. They kept playing, though. The band was unstoppable, or virtually so.) Without the Ramones, opines the also recently deceased Joe Strummer, British punk revolutionaries the Clash probably never would have happened. That and a thousand other rock & roll bands and fans and whole teenage wastelands. Perfection in a black leather jacket at 180 bpm, the Ramones never really fit in but, thankfully, never truly wanted out. Lucky us. 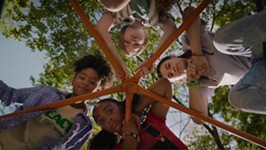 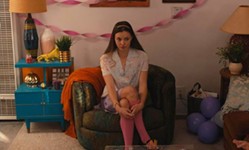 End of the Century: The Story of the Ramones, Michael Gramaglia, Jim Fields