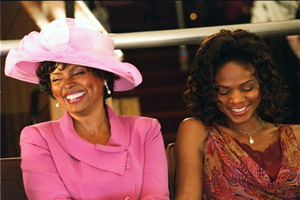 Woman Thou Art Loosed is a very interesting, if not always successful drama that is also part revivalist sermon. The film is based on a novel by Bishop T.D. Jakes, a black evangelical preacher, prolific author, and host of a weekly broadcast on the Trinity Broadcast Network. His nondenominational church, Potter's House, is in Dallas, and Jakes can now add one more experience to his résumé: screen actor. He is onscreen in two capacities: as the charismatic pulpit preacher and as the quiet presence who listens to the heroine’s confession. Rather than a religious tract however, what this film most resembles is the work of Oscar Micheaux, whose films were made decades ago. He was an African-American filmmaker whose films were made for African-American audiences. Their budgets were low, but their emotional intensity was high, overflowing with ragged stories that belonged to the community whose lives they reflected. So too, here. Woman Thou Art Loosed seethes with the rage and anger of modern black women, who are fed up with the legacy of abuse, neglect, addiction, and poor self-esteem that have grown into a self-perpetuating cycle of damage. As the story’s central figure Michelle, Elise simmers with inner anger, which she conveys with sharp angularity as she recounts her tale to Jakes from her death-row prison cell. As a child, Michelle was sexually abused by her mother’s boyfriend (Powell), although her mother (Devine) refused to acknowledge the situation out of the fear of losing her man. This act led Michelle toward a life of drugs, prostitution, and a murder that happens in the film’s opening sequence. Devine gets to show her dramatic side here: Although her curves and little-girl voice are still present, she also demonstrates the difficulty this woman has reconciling her needs. This woman who didn’t protect her daughter becomes one of Bishop Jakes’ biggest supporters, a hypocrisy that escapes no one. Morgan, Boatman, and Powell smoothly round out the cast, yet Woman Thou Art Loosed is still beset with some ham-fisted dramatic moments and confusing narrative hiccups that make the film a little more confusing than it ought to be. This is the first movie in 17 years for director Schultz, a mainstay of the blaxploitation movement (Car Wash) who has been working in television since the late Eighties. The film was produced by T.D. Jakes Ministries and has been marketed grassroots style through the church network, but is now going national with this release by Magnolia Pictures (the same company that put out the films Capturing the Friedmans and Control Room), a company that has never shied away from "difficult" material. This movie that wails with the intensity of a revival chorus is something we can all say amen to. 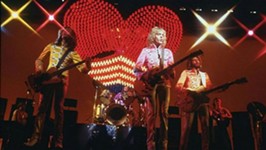