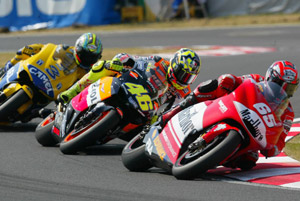 Say what you will about the NASCAR dads. All things considered, I’d far prefer to hang out with the MotoGP hooligans who forego the safety of roll bars and safety cages to rocket their roaring 500cc two-stroke motorcycles down sinuous, far-flung tracks at speeds upwards of 200 mph. There’s something pure – and purely insane – about willingly launching oneself forward so close to the ground and at so great a momentum that it puts a stop order on the heartbeat and taps the adrenal gland with all the reckless abandon of a shotgun at a freshman kegger. Mark Neale’s loud, swooping documentary about the sport, which travels with the 24 riders over the 16 yearly races of the 2001-2002 season (running from April to November), is the straight dope for speed junkies and fans of the art of flinging one’s well-padded frame through the contortions enabled only by disastrously catapulting oneself off a slippery asphalt track at speeds even Dale Earnhardt would have dismissed as lunacy. This documentary, which will surely set fans of the sport on the edge of their seats and the rest of us under them, provides plenty of digitally shot track action but steers clear, to its ultimate detriment, of examining much of the philosophy and personal struggles involved. Sure, Neale tracks Yank newcomer John Hopkins in his quest to overtake the older, wiser, more dented members of the racing world, but there’s little off-screen drama that will resonate with the layman past the "holy cow!" factor. Perhaps it’s enough to simply watch these self-described maniacs career wasp-like around the various British, Japanese, Malaysian, and German racing circuits, but it’s also, for those of us too timid, or mentally stable, to attempt the real thing, a bit of a snooze after a while. Like NASCAR, much of the spectators’ enjoyment comes from seeing the riders suddenly minus their mounts toppling ass over eyebrows at ridiculous speeds. Narrator Ewan McGregor (yes, that Ewan McGregor) notes that there’s been only one track fatality in the past 30-odd years, which is astonishing considering the various high-flying near-nightmares Neale has captured on film. And unlike the all-American NASCAR, MotoGP is a strangely Eurocentric mix of massive egos and sardonic, louche temperaments: If James Bond were 30 years younger, this is how he’d be pursuing Blofeld these days – in a sport that leaves one both shaken and stirred. 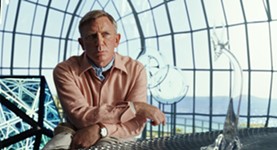