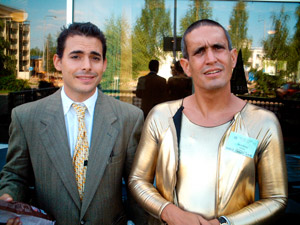 Mike Bonanno and Andy Bichlbaum are the Yes Men. They’re a couple of prankster activists who, as seen in this film profile, bedeviled the World Trade Organization, even though the WTO wasn’t listening. Armed with a fake WTO Web site, they have been invited around the world to provide comments and present lectures on behalf of the WTO. Dressed in thrift-store suits – and at one lecture, a several-feet-long inflatable penislike tentacle that houses a Web cam at eye level, designed for managers to keep an eye on their distant workforce – the pair bring a sense of theatrical absurdism to the task of debunking cultural monoliths and corporate giants. Their lectures – like the one in Finland at which they showcased that ultimate "leisure suit" – can almost pass for the real thing, and often do. It becomes fascinating to see what people will put up with, and how far they will go as the Yes Men’s lectures become more and more absurd. The film also showcases a university lecture in which their fake WTO representative, Hank Hardy Unruh (Bichlbaum), teams up with a bogus McDonald’s representative to announce their latest breakthrough in recycling (with PowerPoint slides and everything): reconstituting human burger waste into several more generations of Big Macs. Before they teamed up as the Yes Men, Bonanno and Bichlbaum individually worked up impressive résumés as media tricksters: Bonanno founded the Barbie Liberation Organization, which switched the dolls’ voiceboxes with those of G.I. Joes, and also managed the fake George W. Bush Web site that caused such an uproar during the last election; Bichlbaum managed to substitute swishy men hugging for the big-breasted bimbos in the background of a major video game. Director Chris Smith (the hilarious documentary American Movie) here teams up with a couple of his regular collaborators, Sarah Price and Dan Ollman, to film the Yes Men’s antics. Their film is genuinely entertaining and thought-provoking, although it feels as though something expository has been left out. You can’t look to The Yes Men to find out why the WTO is – or should be – a sworn enemy. There’s also very little material explaining how these activists get by, how they support themselves and such. The film is nevertheless inspiring and shows just how far a couple of guys, a few computers, and a good sense of humor can go.