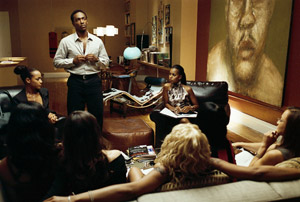 The politest way to assess Spike Lee’s latest polemic is to call it too ambitious. "An unholy mess" might come closer to the truth. Or how about a staggeringly confused amalgam of sex comedy and corporate drama that would be insulting if it weren’t so relentlessly silly? She Hate Me’s first point of interest is the professional downfall of Jack Armstrong (Mackie), a young VP at a biotech company who gets sacked for being a whistle-blower. The film then awkwardly segues into sexual hijinks, in which Jack – now unemployable – earns $10,000 a pop for providing sperm to a ravenous pack of lesbians. "Providing sperm" is a rather clinical way to describe what goes down: The lesbians, to a one, eschew the turkey baster route for an old-fashioned roll in the hay with the strapping Jack, and – even more absurdly – to a one, they all get their jollies in the process. Sure, Lee’s looking for laughs here, but there’s something so misguided, not to mention delusional, in his utterly male-centric understanding of a lesbian’s interest in the sex act with a man. When the lesbians – coarsely hollering for Jack to "show us your tube steak!" – demand that he strip naked for their inspection, one suspects that the filmmaker is trying to address sexual objectification in a way that Girl 6 did. But female sexual politics has never been Lee’s strong suit (see the aforementioned Girl 6 or even his provocative debut, She’s Gotta Have It), and he doesn’t fare any better with female homosexual sexual politics. Defenders of She Hate Me (an incredibly exclusive club, I imagine) might argue that to nitpick about Lee’s depiction of lesbians is to miss the larger picture, but I’d argue Lee’s vision is just myopic. His most prominent lesbians stomp around in stilettos (when they’re not lounging in lingerie) and speak to Jack in a perpetual come-on coo, whereas his corporate figureheads are slick, smarmy caricatures. Maybe the one-dimensionality of his characters is meant to achieve a fabulistic effect (especially when Jack links his plight to that of the security guard who busted the Watergate scandal wide open), but the execution is lacking, to say the least. And what the hell is John Turturro doing wandering in for a nonsensical cameo as luscious-lesbian Monica Bellucci’s mafia don Daddy? There are bright spots throughout – Q-Tip as an affable buddy with underachieving sperm, Terrence Blanchard’s lush score (even if it lends a heavyweight feel the film hasn’t earned), and one of Lee’s signature stylish montages, in which the expecting mothers howl in quick-cut labor pains. But the stilted Mackie, who must carry the film through its heavy-handed Enron-like plot and into its preposterous pregnancy gaffes, never connects. A stronger, more likable leading man might have been able to keep the film afloat, but I doubt anyone could save She Hate Me from its off-the-deep-end coda, in which Jack forcibly inserts himself, via deep-tonguing, into a lesbian dynamic. The larger point of She Hate Me, I gather, has something to do with personal responsibility and America’s worship of the almighty dollar (the opening credits end on a $3 bill with Bush’s dumb mug grinning down on us). But good luck ferreting those messages out from under the unsubtle stiletto heel of Lee’s man-hating/hetero-sex-loving lesbians, and from under the iron-fist of his numskull sexual and social moralizing.