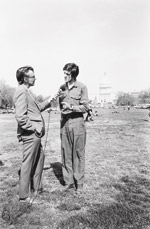 If you were thinking that Going Upriver: The Long War of John Kerry is just one more entry in this unprecedented season of political documentaries, then you’ll find yourself pleasantly surprised. This film has much greater ambitions than to be viewed simply as an election-year partisan broadside. In examining Democratic candidate John Kerry’s years as a soldier in the military and as a civilian leader of Vietnam Veterans Against the War, this documentary also seeks to identify the sparks that made Kerry and other members of his generation so ready and eager to serve their country – even when that commitment causes it to seem as though they’ve backed away from earlier convictions and pronouncements. The movie uses material from Kerry’s letters and journals, interviews with family members and men who served with him, and archival photographs and film footage to show that Kerry has spent most of his adult life in public service of some sort or another. Like others who came of age in the Sixties, Kerry heard President Kennedy’s galvanizing call to "ask not what your country can do for you," but instead ask for what "you can do for your country." Loosely based on Douglas Brinkley’s book Tour of Duty, Going Upriver looks at how Kerry’s opinions of the Vietnam War were altered by his experiences there, where he witnessed a war fought by commanders in a way that bolstered body counts instead of tactical victories, and preserved a deceptive reality over disturbing images and numbers. Documentarian George Butler is one of the best in the business: He’s responsible for the body-building film Pumping Iron that first introduced young Arnold Schwarzenegger to America in 1977, and recently he made the stunning film from photographs, The Endurance: Shackelton’s Legendary Antarctic Expedition. Butler has known Kerry for a long time and is in a good position to have observed the senator’s development. In this presidential election year of 2004 when the political fray continually returns to Vietnam, and we’re witnesses to an astonishing turn of events in which a veteran who served honorably in Vietnam is polling behind a draft dodger who barely served at home in the National Guard, it’s clear that as a country we are still stuck upriver in the Mekong delta. Butler’s film hopes to confront our national battle fatigue so that we may move on.