Bright Young Things begins with the camera, bobbing and weaving to the frenzied swing of "Sing Sing Sing," zooming in on crazy-angled close-ups of London’s wealthy set in the 1930s, the title’s "bright young things." (The film is adapted from Evelyn Waugh’s novel, the far gloomier-sounding Vile Bodies.) The costumed revelers are bathed in a ghoulish red haze, and, indeed, there’s something devilish to the witty banter and bountiful drink, but if this is meant to recall hell, then, baby, hell looks like a hell of a lot of fun. Young socialite Nina (an endearing Mortimer), in attendance at this eye-popping bacchanalia, begs to differ, moaning at first introduction that she’s "never been more bored in my life" – all the while you can see her privately counting the minutes to the next shindig and wondering just what she’ll wear. In any case, her boredom is shortly alleviated when beau and on-again/off-again fiancé Adam (Moore) returns to town. The shaky status of their engagement is entirely due to Adam’s poverty; he’s a struggling writer who can’t seem to keep a farthing in his pocket and turns every lucky break into another missed opportunity. He loves his girl but good, and Nina, in her own way, loves him back. They speak almost entirely in quips, but there’s a real tenderness buried in their banter. Still, Nina’s a realist, and Adam a pauper; the majority of Bright Young Things is a ticking-clock tour of one party after another, each one successively more debauched, and Adam haplessly botching every chance he gets to secure a future for his fiancée. The party, inevitably, has to stop, and writer/director Stephen Fry (who is also a novelist, and is best known as an actor from Black Adder) ably transitions from the early scenes of careless love and carefree revelry into something more ominous and surprisingly moving. The film is teeming with characters – and by characters, I mean characters: the theatrical and charmingly fey Miles (Sheen); horsey, good-time gal Agatha (Woolgar), who gets the Prime Minister sacked; a mysterious, ruddy drunk named the Major (Broadbent) – and yet, for all their kooks and quirks, there’s tragedy trailing the hem of their overpriced, overtailored dress. The film stumbles a bit in its third act, when war kills the good times for good. The epicness of the war doesn’t quite jibe with Bright Young Things’ previously insular scope, and its too-long epilogue is too spot-on, too plainspoken – the victim, I suspect, of the film’s prior, perfectly wonderful dodging of aggressive romantic sentiment, of wearing its heart on its sleeve. The heart was there all along, all right – it just sounded a lot better when it was couched in a barb. 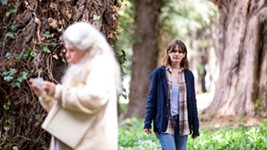 Relic
Senility and the supernatural in this nerve-wracking Australian horror