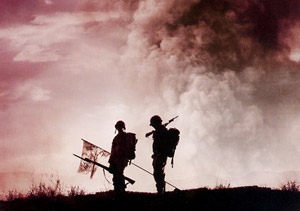 War, uh, what is it good for? Some of the best examples of filmmaking, of course. The most costly and the most popular film in South Korean history is also one of the most gripping and epic war films ever made, and certainly the only one I can think of that portrays the Korean War from the viewpoint of both sides of the conflict (that being North and South, not Korean and American). It will come as no surprise to fans of Asian cinema that Je-gyu’s film is a ferociously bloody affair – there are more missing limbs and shattered young men in the first 20 minutes than in all of Steven Spielberg’s Saving Private Ryan, a film that Je-gyu and his overworked effects crew have clearly taken to heart. Not only does Tae Guk Gi employ the same stroboscopic camerawork for its battle scenes, but this story of two young brothers conscripted against their will to fight the invading Northerners and their Red Chinese allies is spotted with moments of elegiac tenderness that crop up every now and again like daisies in a charnel house. Jin-Tae (Dong-Gun) and Jin-Seok (Bin) Lee are the siblings in question; as the film opens they frolic (there’s no other word for it) in the crowded streets of Seoul, the elder Jin-Tae buying his younger brother first a Popsicle and then a new pen to help him achieve his scholastic goals. Jin-Tae, on the other hand, shines shoes in a bleak alley, content, it seems, to let the family’s future rest on the shoulders of his smarter, shier brother, while he himself plans for a wedding to his true love Young-shin (Eun-Joo) and takes care of the pair’s ailing mother. And then: war, and forced conscription into the army, mere moments after the North stages a surprise attack on the South. The brothers are thrust, totally unprepared, into the heat of battle without even a brace of basic training, and it’s here that Je-gyu’s film really begins, as the once tender Jin-Tae is inexorably warped by his experiences, turning from tender brother to rampaging anti-Communist killing machine, while his younger brother looks on helpless to stem the transformation. Kang’s film is a vicious, brutal anti-war statement, and not one for the faint of heart, either – the $12 million U.S. budget may not seem like a lot comparatively, but it has purchased enough squibs and fake blood to mount a dozen returns by Sam Raimi to his days of Evil Dead-ly goregasms, and while Tae Guk Gi’s horrific imagery is peppered throughout with moments of surreal beauty, it remains one of the most realistic depictions of battlefield chaos I can think of, and like war, it’s a thoroughly depressing, dispiriting experience, going from the gung-ho to the grave and back again in the click of a firing pin. 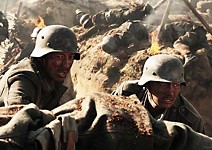 My Way
This South Korean epic is a gory and realistic portrait of the horrors of war.

The Warrior's Way
An Asian assassin seeks refuge in a small town in the American Badlands where ninjas and cowboys duke it out.