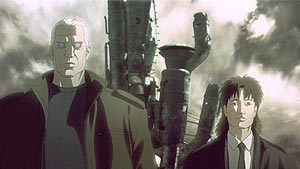 Ghost in the Shell 2: Innocence

Post-apocalyptic neo-noir gets a ferocious upgrade in this loquacious albeit visually stunning sequel to the cult 1995 animé. Set in Tokyo in 2032, Innocence has all of the trappings of its quasi-cyberpunk genre – robots, a teeming metropolis seemingly on the verge of Blade Runner-ish collapse, and identity issues galore – but strives to mine new territory by incorporating a wealth of philosophical quandaries that both puzzle and enlighten both the audience and the characters onscreen. Think of it as a 100-minute game of Go, with the pieces informed by sundry existential crises, and then add a dash of good old-fashioned cyborgs-run-amok in this none-too-brave new world, and you’ll begin to get the picture. The storyline is nothing if not complex: The cyborg cop Batou returns from the original film, searching this time out for the killer of a sexbot (a "gynoid" in the film’s lingo), who in turn has murdered its human john. Paired with his human partner Togusa, Batou, once human but now a collection of circuitry inhabited by a human soul (the "ghost in the machine" of the title), traverses a grim landscape of duplicitous cyborgs and their human creators in his search for the ever-elusive truth; he also takes time out to care for his beloved basset, Ruby, a humanizing element that renders the lumbering ’borg more soulful than many of the purportedly flesh and blood characters around him. Innocence is a deeply ambitious project, from its near constant quoting of the deepest philosophical sources – the Bible, Descartes, Shakespeare, and more fall from Batou’s lips like pearls of wisdom before swine – to its central conceit: What does it mean to be human? Philip K. Dick and Ridley Scott’s Blade Runner adaptation are the clearest precedents, but director Oshî and production designer Tanada Yohei up the ante considerably by combining traditional cel animation with some of the most gorgeous CGI backgrounds and cityscapes yet conceived. And unlike so much of the animé that makes it to the West (and discounting the wealth of terrific underground stuff that circulates on DVD and DiVX these days), Innocence is possessed of a highly literate, almost classical story, the search for the meaning of human life itself, and the unshakable belief that it encompasses much more than skin and bones.