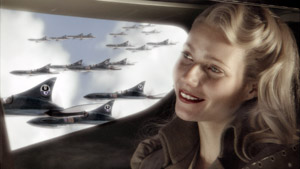 Sky Captain and the World of Tomorrow

If you were lucky enough (and old enough) to have grown up in a household surrounded by the old pulps Amazing Stories, Weird Tales, and their serialized cinematic offshoots Radar Men From the Moon, Smilin’ Jack, and the dozens of others that made Saturday afternoons sheer bliss back before the advent of the Internet (or, for that matter, Technicolor), then you’ve already experienced something of the glorious gosh-wow sense of wonder that director Kerry Conran and brother/production designer Kevin have brought to this amazing project. It’s far more likely, however, you were born after the 1939 New York World’s Fair, and this loving tribute to all things retro-futuristic will arrive not as a trip down Joe Franklin’s Memory Lane, but instead as a whole new slew of eye-candy and derring-do that recalls both the old Republic serials and their more recent counterparts, Raiders of the Lost Ark , Flash Gordon, and The Rocketeer. Conran’s film encompasses everything that made Forest J Ackerman and Ray Bradbury giddy back in the day but uses entirely new techniques to get there. The film’s actors were shot on green-screen soundstages and then composited into computer-designed environments, such as 1939’s New York City, remote and forbidding island enclaves, and astounding flying aircraft carriers. From a geek perspective (in the best sense of the phrase), this is what the Commodore 64 was leading up to, and that absence of a social life in high school? So worth it. Paltrow is Polly Perkins, intrepid reporter for the Gotham City Chronicle and onetime flame of ace flier Sky Captain (Law, his charm ratcheted up to "11," as is the character’s P-40 Warhawk). Noted scientists are turning up dead and the cities of the world are under attack from giant rampaging robots and bizarre avian airships with huge, flapping wings. Making matters personal, Sky Captain’s right-hand man and ace mechanic Dex (Ribisi) has been kidnapped, which launches the sassy Polly and her semibeau on a search for a mysterious Dr. Totenkopf (Laurence Olivier, back from the grave via CGI trickery) and which eventually lands them in the company of Sky’s other gal, the black-clad British pilot Capt. Francesca "Franky" Cook (Jolie). Adventure, as they say, awaits. There’s so much going on and so much to savor visually in Sky Captain, and so gleefully retro, without a pinch of irony, is the film (check out who’s climbing the Empire State Building as Sky Captain flies through the canyons of New York!), that it’s easy to overlook the fact that Law, Paltrow, and Ribisi are all turning in some of the most accomplished acting of their careers. Paltrow in particular is spot-on, channeling Barbara Stanwyck via Lois Lane to Law’s Errol Flynn-ish aviator. Everything here from costuming and production design to the note-perfect score from Edward Shearmur works in tandem to create not so much a film as a singular and joyous tribute to a vanished age when wonder only cost a nickel and played three times daily at the Bijou.

Fantastic Beasts: The Secrets of Dumbledore
Sloppy scripting breaks the spell of this bloated sequel 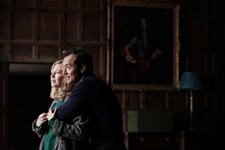