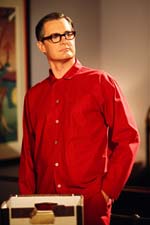 Despite its silly title, Touch of Pink isn’t the gay guy’s version of a Doris Day romantic comedy. Rather than wrestle with the question of whether he should lose his virginity to hunky Rock Hudson, the perplexing question faced by Alim (Mistry) is more queercentric: Should he come out to his devout Muslim mother, Nuru (Mathew), who’s come to London in the hopes of prodding him to return to Toronto and marry a nice Indian girl, or should he pretend to play it straight and alienate his live-in boyfriend? Like Doris’ dilemma, it’s a fairly conventional premise that inspires mediocrity in the film’s first half or so. But once it gets past the one-note caricatures and predictable scenarios, the hues in Touch of Pink begin to darken, run a little deeper. The relationship between mother and son, which begins like something out of Portnoy’s Complaint, becomes more complicated as the film progresses and the stereotypes recede for real human beings to take their place. True, Mistry’s performance as Alim is often whiny and sullen, and he too frequently resorts to a facial expression that evokes a look of constipated angst – but Mathew is a wonder as Nuru, whose maternal instincts initially operate more out of fear than love. What’s amazing about Mathew’s performance is how Nuru becomes more beautiful, more luminous as she comes to accept her son’s humanness, as well as her own. It’s a truly transcendent turn that should open a few doors to this relatively unknown actress. What’s more of a mixed bag is the gimmicky presence of MacLachlan as the ghost of Cary Grant (yes, you read that correctly), who has served as Alim’s imaginary father figure since he was a boy. MacLachlan pops up periodically wearing ascots and swilling champagne, advising his ward how to manage a life of heterosexual pretense, just as many have speculated Grant did during his reign as Hollywood royalty. Despite its good intentions, this narrative angle contributes little to the film and, after a while, the movie star’s appearances become tedious. To MacLachlan’s credit, his impersonation of the indomitable is serviceable, although it must be said that the role is weirder than anything David Lynch ever dreamed up for him. 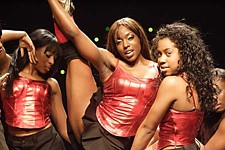 How She Move
She move something fierce in this low-budget Canadian crowd-pleaser about stepping.