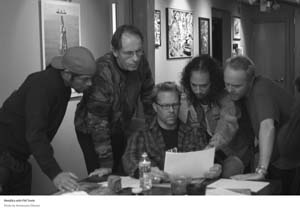 Metallica: Some Kind of Monster

"All these rules and shit," smirks Metallica drummer Ulrich in the studio. "This is a rock & roll band." But when addiction and animosity threaten to rend the group during their recording of the St. Anger album, they call in Phil Towle, a $40,000-a-month group therapist with canary-yellow cableknit sweaters, who prescribes mission statements and motivational placards. ("The Zone: Admission is Believing!") Documentarians Berlinger and Sinofsky (Paradise Lost: The Child Murders at Robin Hood Hills) capture every cheap shot and creative clash; for an official documentary, it’s candid enough to indicate that the group is less megalomaniacal than the Napster controversy suggests. You don’t have to be a Metallica fan to watch in fascination as singer-guitarist Hetfield forbids his bandmates and producer Bob Rock from even listening to the playback after he leaves at 4pm for his rehabilitation therapy, lest they consider having an opinion in his absence. ("Well, that’s like the last 15 years have been for me," rejoinders guitarist Hammett, a mensch who seems to have been whipped by Hetfield and Ulrich hitherto.) The group slogs through so much bullshit that only rock & roll can save them. Then comes a lovely moment at a "fan day" in which the group lets fans sit in for former bassist Jason Newsted; after various fanboys goof around, an unassuming soccer-mom type steps up and accompanies the group on a barn-burning "Seek and Destroy." It’s a lovely scene, as pure a portrait of the jouissance of rock as ever there was. (A subsequent montage captures a series of heavyweights – from Eric Avery and Pepper Keenan to Nine Inch Nails bassist and Corpus Christi native Danny Lohner – trying out.) The movie also smartly engenders discussion about growing up, having a family, and balancing your life after nearly two decades of screwing around on the road, extreme narcissism, and drinking everything in sight. It should appeal beyond the group’s fan base but hit home especially hard if Master of Puppets was your high school soundtrack. But really, Monster is, at its best, simply a chronicle of people trying to get along, which makes it compelling viewing indeed. 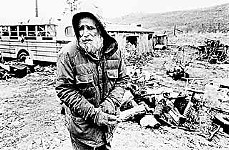 Brother's Keeper
This documentary is about the unlikeliest of subjects: an alleged mercy killing between a pair of barely socialized, virtually illiterate, unkempt, unhygienic, slow-witted, never-married bachelors.