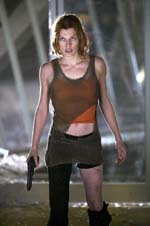 Mindless zombies are back in fashion, apparently. Last year’s fine remake of George Romero’s Dawn of the Dead kick-started the undead trend, and the upcoming Brit import Shaun of the Dead raises the ante considerably (as will Romero’s own Land of the Dead, which presumably has begun production by the time you read this), and now we have this video game-inspired sequel to 2002’s Resident Evil. Like its predecessor, Resident Evil: Apocalypse has the look and feel of a modestly budgeted European horror knockoff. It’s nowhere near as god-awful as last year’s House of the Dead, a genuinely terrible zombie film that recalled nothing so much as an inept stab at Oasis of the Zombies minus the legions of dead Nazi stormtroopers, but by the same token Alexander Witt, in his directorial debut, isn’t likely to win many Fangoria awards this time out. The leggy, sexy Jovovich is back as Alice, the only survivor of the first film (during which she battled the undead, brought back to life as accidental bioweapons by the sinister Umbrella Corporation). Once again, she’s pitted against the lifeless hoards, although the stakes are raised considerably as the infection has broken free of the Corporation’s underground bunker and infected, within the first five minutes of the film, the entire population of Raccoon City (looking suspiciously like Toronto). Along for the wild ride are another gun-toting babe (sorry, but that’s the only word for her), Jill Valentine (Guillory), a young scientist’s daughter named Angie (Sophie Vavasseur, also returning from the first film), and a trio of SWAT-types led by genre stalwart Oded Fehr’s Olivera. Together the group must battle not only the undead in an attempt to break out of the now-cordoned-off metropolis before it’s "sanitized" by the powers that be, but also a lumbering mutant with enough firepower to liberate Quebec in one fell swoop. Witt manages the ebb and flow of the action setpieces especially well, and he has an eye for night-lensed chaos, but ultimately his fight choreography ends up being so muddled with rapid-fire editing that it’s often difficult to tell who’s bashing whom. The zombies, noticeably, are shot in the sort of slow-motion, blurred charges that render individual horrors moot, a sure sign of a meager make-up effects budget. Fans of the video game will doubtless love it all, but for true fans of the gnashing dead – and we count ourselves among them – this is strictly second-tier terror. 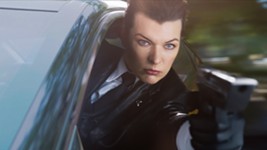