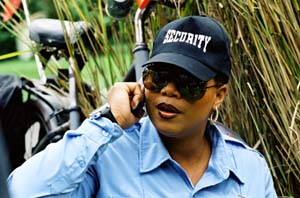 It takes some time to get to this lowbrow comedy’s titular cookout – first, young Todd Anderson (Storm P) must nab first-round draft pick for the New Jersey Nets, to the delight of his loving parents (Lewis and Faison), zany extended family, and gold-digging girlfriend, Brittany (Good). While Brittany may thrill at Todd’s new spending powers (her enthusiasm signaled with something along the lines of a pterodactyl screech), the rest of the family and his agent (Silverman) are a touch concerned with his extravagance. What better way to bring him back down to earth than a cookout? But a scheduling snafu pits the cookout against a big meeting with potential sponsors, and Todd’s endorsement deal just may be undone by his three-ring circus of a family, with cousins including a couple of shotgun-toting country boys, two 400-pound stoners, and a single mom with four kids but no daddies. They’re caricatures, these "eccentric" types, but at least they don’t completely devolve into offensiveness. Leave that to hip-hop artist Ja Rule, as a thuggish one-time schoolmate of Todd’s who brandishes a gun at regular intervals. One suspects, with his role, the filmmakers mean to tweak stereotypes, but instead only reinforce them. Same goes for Danny Glover’s priggish, opera-loving next-door neighbor, who undergoes a pot-induced transformation into a ghetto cliché, barking orders to his wife: "Woman! We go home when I say so!" (The scenario further depresses when his wife – played with typical bobble-headedness by Fawcett – swoons at this new, misogynistic twist in their relationship.) SNL alum Tim Meadows has a funny bit as a conspiracy theorist (he likens the game of golf to the white man’s "raping" of Mother Earth), and Queen Latifah is a pleasure to watch, even if she must suffer the indignity of playing a dunderheaded rent-a-cop, but all of it – these wacko characters contributing to what the filmmakers no doubt hoped to be "comic mayhem" – distracts from the most interesting, and by the far the most admirable, ingredient of The Cookout – the relationship between Todd and his parents. They are blessedly normal, and even within the high-concept context of the NBA, the Andersons’ trials – an only son learning how to manage money, have his own home, and stay true to the values his parents taught him – are worthy topics for exploration. Everything else here – from the gross caricatures to the so-called comic mayhem – is sour to taste. 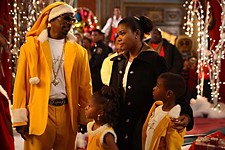 The Perfect Holiday
In this lightweight yuletide fluffery, a young girl turns to a shopping-mall Santa to find a husband for her divorced mother.