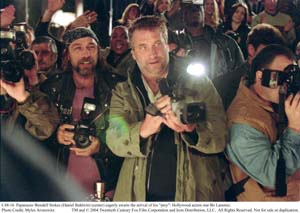 "I am going to destroy your life and eat your soul," hisses paparazzo Rex Harper (Sizemore) to Bo Laramie (Hauser), the new darling of the action cinema who has just smacked Rex to the ground for intruding on his personal life. Bo’s sudden rise to fame has made him a favorite of the unscrupulous celebrity photographers (and, of course, there is no other kind) who now hound the star and his wife and son for tabloid shots, which are then skewed out of context by the time they hit print. "Why is Daddy on the cover of that magazine with a black thing covering his pee-pee?" asks young Zach (Bryan). It’s enough to make Bo want to punch somebody, but instead of release Bo finds himself fined and sentenced to anger-management therapy. He has also become the new sworn enemy of Rex, the Falstaffian king of the L.A. paparazzi, who makes it his mission to ruin Bo’s life. Thus the groundwork is laid for a novel revenge movie, reputedly the brainchild of producer Mel Gibson, who hatched the idea while sharing paparazzi horror stories with some of his celebrity buddies. While Bo’s insufferably cute son lies comatose (the result of one of Harper’s stunts, reminiscent of the auto crash alleged to be the cause of Princess Di’s death), Bo plots the demise of Harper and his cronies. If Bo is meant to be a sympathetic character, however, the makers of this movie badly miscalculated. Although the movie’s premise is conceptually intriguing, Paparazzi sports no likable figures. Each character is more distasteful than the next. The movie has no shading: All paparazzi are invasive mercenaries bordering on thugs; the revenge of the injured actor is just and unpunished. Gibson underscores his belief in the morality of this movie by appearing in an amusing little cameo as a fellow patient in anger-management therapy. (In terms of Gibson’s personal mindset, this grizzly revenge movie is a most interesting follow-up to the previous movie he made about that "turn the other cheek" guy.) Also popping in for cameos are other real-life paparazzi pinups, Vince Vaughn and Matthew McConaughey, while Chris Rock appears in a small role, and Daniel Baldwin’s turn as a fellow paparazzo obviously references big brother Alec’s well-reported run-ins with pushy photographers. And casting current whipping boy Tom Sizemore as the head shutterbug throws a further self-referential log on the Paparazzi fire. All this would be fine if the script by Forrest Smith had more wit and fewer clichés, or the direction by former make-up artist Abascal had more inventiveness. But the movie and its unpleasant brood just eat into your skull and make you wish that they would all simply go away.