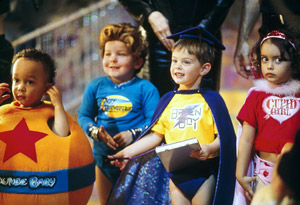 I am happy to report that on a Monday night at 9:30pm in Austin, Texas, I was the only person in the theatre watching SuperBabies: Baby Geniuses 2. After sitting through the movie, I can tell you that this underwhelming repsonse is exactly as it should be. This is a movie that should have bypassed the theatres and gone straight to DVD. It is offensive on so many levels. First, let’s just call SuperBabies what it is: child abuse. Toddlers made to gurgle phrases that are later looped by more verbal child actors and dress up in dopey costumes should be protected by some kind of child-labor laws. I’m beginning to think that actors ought to be capable of spelling their names before being allowed to have their signatures or consents attached to any binding work contracts. The stars of this movie are people who should be protected within our society rather than exploited by it. Technically, SuperBabies is also a botch job, although the amount of baby wrangling required by the movie is incredible to contemplate. Twins and triplets share duties among the leads, and the differences are often discernible; tot-sized body doubles fill in even more obviously during the action sequences. SuperBaby, aka Kahuna (Leo, Myles, and Gerry Fitzgerald) is a Peter Pan-like kid who swoops in to protect all other kids from harm. He lives in a hallucinatory, hologram-filled funhouse (that seems set-designed by people who’ve swallowed bad acid) and turns the other babies into superheroes. The adults are all nincompoops, except for baddie Jon Voight, who is a superhammy nincompoop. Bob Clark of Porky’s and A Christmas Story fame directs this sequel as he did the original. The movie’s Peter Pan touchstones are overworked and lack the mythic richness of the J.M. Barrie story. On a further disingenuous note, SuperBabies takes unwarranted swipes at the evils of television and the Internet. If Kahuna were really a hero of babies everywhere, he would pounce on this movie and eradicate it from Earth. 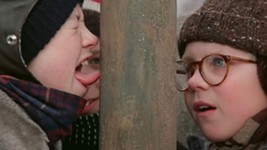 A Christmas Story
Ralphie wants nothing more for Christmas than a Red Ryder 200-shot, range-model air rifle, but he must convince Mom and Dad that, if lucky enough to receive this “Holy Grail of Christmas presents,” he won't shoot his eye out. 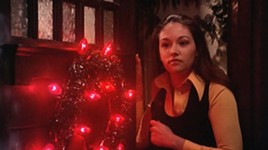 Black Christmas
In this prototype slasher movie, a killer targets a sorority house while the sisters are also plagued by a rash of crank calls.