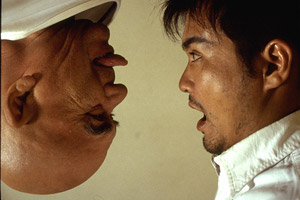 The films of Japanese director Takashi Miike are not to everybody’s taste. If, however, you’ve never encountered the work of this astonishingly deranged artist and you’re in the mood for a film that parlays the hoary clichés of the yakuza film into a stunningly surrealistic exercise in cinematic madness, you could do worse. Watching any of the insanely prolific Miike’s ceaseless assaults on the cinematic status quo is akin to having some very bad acid slipped in your drink and then being forced to ride a broken roller coaster at knifepoint in the rain. It’s fun, sure, but like sex with a Cuisinart you wouldn’t want to do it every day. Miike makes his closest Western counterpart – David Lynch – look like Chuck Jones on a gambol through Super Happy Fun Town, and his films (among them the kiss-me-dreadly shriekiness of Audition and the viscera-entangled crime story of Ichi the Killer) somehow manage to both upset the societal apple cart and simultaneously bake you a yummy pie – never mind that the apples are staring back at you and the crust is roiling. Gozu is the story of a low-level Tokyo gangster, Minami (Sone), who is sent off to the country by his bosses to kill his friend Ozaki (Aikawa), a midlevel boss who’s gone round the bend and taken to identifying Chihuahuas as "yakuza attack dogs" right before he stomps in their heads. On the way to the hit, Ozaki is accidentally killed and his corpse vanishes. Minami, in an increasingly strange township and cut off from his chain of command, must navigate a nightmarish zone of unreality that owes something to Buñuel and a lot more to those intensely creepy Japanese fetish Web sites that glorify the de-augmentation of the human form via chainsaw. It’s as though Minami – and by extension the audience – had somehow stumbled into David Cronenberg’s Videodrome world, where the normal rules of physicality do not apply in the least and sex is a weapon to be discharged at point-blank range … in the face if possible. Gozu features bullheaded men (literally), maniacal lactating women, and a birth scene that would probably make John Ashcroft put a service revolver in his mouth, but despite this (or perhaps because of it), Miike’s film is a cunning little comedy of manners gone mad. Even when you feel you have to turn away from the screen or lose your lunch, Miike has something interesting to say. I’m not entirely sure what it is, but his lips are moving and something horrific is definitely coming out.