There’s a serial killer on the loose, and newly transferred FBI agent Thomas Mackelway (Eckhart) is on his trail. The curious thing is that the killer only murders sexual predators, and that’s something of an assist to law enforcement. Agent Mackelway, meanwhile, is plagued by constant headaches and a feeling that he is being watched. He has murky flash-edit visions that may or may not have something to do with the reason why he was transferred from the Dallas office to Albuquerque, or maybe the images have some telepathic connection to the killer on the loose (Kingsley). When the killer starts faxing clues to Mackelway and then murders a longtime nemesis of the agent, there’s no longer any doubt that the killer is communicating with Mackelway. Suspect Zero is replete with macabre, half-seen imagery in the form of drawings and flashbacks, although the actual murders are conveyed with relatively modest bloodletting and gore. This is in keeping with director Merhige’s avant-garde pedigree: In addition to numerous gothically inclined music videos, Merhige has also made a black-and-white, silent, and surreal feature called Begotten and the more recent vampire art movie Shadow of the Vampire. The director’s visual sense is marked by its dark mannerism and weirdness, but it does not blend smoothly with this police procedural. The story by Zak Pen (Inspector Gadget, Behind Enemy Lines) and Billy Ray (Shattered Glass) is a mélange of things we’ve seen in other movies about the symbiosis between the hunter and the hunted. The story is essentially a pas de deux between Mackelway and the serial killer. Carrie-Anne Moss, who plays Mackelway’s old partner from Dallas, is brought in for totally superfluous reasons, and Moss’ former fellow cast member (Lennix) from The Matrix pictures plays the agitated boss, who just wants to get the case solved pronto. Suspect Zero can be difficult to follow at times because of all the weird graphic inserts and extreme angle shots, although the familiarity of the basic plot ought to carry one through the rough spots. Kingsley plays the role in full psycho mode, even though the role calls for him to be part good guy and part bad guy. Instead of building suspense and tension, Suspect Zero devotes its efforts to creating a weird and creepy milieu that will leave fans of police procedurals wanting and avant-garde enthusiasts scratching their heads. When it’s over, what remains with the viewer is a feeling as murky and ill-defined as the movie’s key imagery. 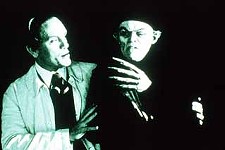