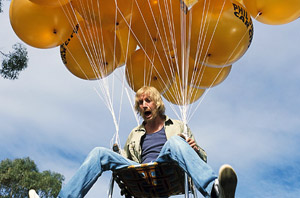 As sweet but emotionally ethereal as a Splenda meringue, this Aussie import, allegedly based on real-world events, lingers in the memory for only as long as it takes to find one’s car in the parking lot outside. Once the key hits the ignition, you’re likely to find Danny Deckchair vanishing like cotton candy in a crematorium. Still and all, it’s difficult to fault a film these days for being too good-natured. Danny Deckchair, which tells the improbable tale of a Sydney-based concrete ’n’ foundations man (Ifans in the title role) who, during the course of an inebriated backyard party, ties a bunch of helium balloons to his aluminum deck chair and sails into the sky only to touch down far away in the back yard of a small-town police officer (Otto), with whom he promptly falls in love. The bizarre event triggers a media frenzy during which Danny’s longtime girlfriend Trudy (Clarke) likewise falls for suave Murdochian talking head Sandy Upman (Muldoon), even while she’s pleading live on-air for her hapless beau’s safe return. Balsmeyer’s film seems to want to skewer both the vainglorious media and its common-man victims-cum-abettors, but it’s the emotional dissatisfaction of the average Joe, represented here by Danny and his new love, the tomboy cop Glenda, that is the real crux of the matter. Trudy and Sandy rush about Sydney, both blindsided by dreams of newfound cathode-ray glory. Danny, who is in no rush to return home or, for that matter, to confess to Glenda that he’s actually that peculiar "deckchair fellow" everyone’s talking about in the national news, starts setting up a new life in Glenda’s orbit, securing an equally improbable position as campaign manager to a local small-time politician and finding he has all manner of previously untapped human resource skills. For all its winsome charms, Danny Deckchair is simply too frothy for its own good, and the feel-good comedy on tap here might as well be the swiftly settling head on the world’s blandest beer. Ifans, who first came to notice in the rowdy Cool Britannia outing Twin Town has in the intervening years parlayed his imperfectly handsome Welsh mug into various excellent supporting roles (Notting Hill, The Shipping News, and the upcoming Vanity Fair)) and the occasional co-starring turn (Michel Gondry’s willfully bizarre Human Nature), is for once as unexciting as a post-pop soap bubble, and even that curiously Frankenstinian face of his feels like something of an afterthought here. It’s a pleasant enough ride, certainly, but in the end it also has all the wicked emotional punch of Bill Cosby on Quaaludes.