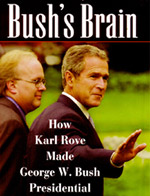 The last couple of years have marked something of a renaissance for the political documentary, both in terms of quality and public awareness. Suddenly docs got, well, kinda sexy, with provocative, galvanizing turns from genre stalwarts Michael Moore and Errol Morris, and homeruns from young guns like Jehane Noujaim (Control Room) and Alexandra Pelosi (the lightweight but still entertaining Journeys With George). The future continues to look bright with new offerings like Outfoxed: Rupert Murdoch’s War on Journalism (opening next week in Austin) and local filmmaker Paul Stekler’s Last Man Standing (screening locally this week and, nationally, on PBS’s acclaimed POV series), but into these politically and artistically breathless times comes the embarrassing hiccup of Bush’s Brain. The film, which premiered at SXSW Film 04, takes its name and its raison d’être from the book by Texas journos James C. Moore and Wayne Slater, which detailed the political ascension of Dubya as orchestrated by his chief adviser, Karl Rove (the title’s "brain"). Almost entirely via talking-head interviews (and chiefly with Moore and Slater), the film examines various instances of suspected Rove chicanery – including the mysterious bugging of his own office that many feel cost Mark White the gubernatorial election in 1986, as well as smear campaigns against Sens. John McCain and Max Cleland and the political assassination of two Department of Agriculture officials that resulted in jail time for the both of them (and brings the film’s most heartfelt moments, as the men grapple onscreen with their professional ruin). The material itself is fascinating stuff, especially for those unfamiliar with Rove’s particularly sordid relationship with Texas politics, but co-directors Shoob and Mealey’s presentation is pedestrian in its best moments and downright offensive in its worst. (Aesthetically, the production values are on par with a television attack ad, bold-faced, reactionary title cards and all.) Bush’s Brain presupposes too much knowledge on the part of the viewer and further hampers itself by having no discernible structure, just a haphazard jogging through Rove’s decades-long career. The film amounts to a series of anecdotes – albeit powerfully damning ones – that the filmmakers simply cannot seem to wrangle into a comprehensive or cohesive whole. Perhaps sensing their failure, they tack onto the final minutes an extended sequence that details the death of a serviceman in the Iraqi war. This tangent first plays as a non sequitur – one wonders what it’s doing in the film at all – and then blossoms into a bald-faced exploitation of one family’s loss in order to (poorly) service Shoob and Mealey’s own agenda. Clearly the film is archly trying to connect the dots between Rove and the supreme mishandling of Iraq – and a compelling case might be made – but it isn’t made here.

The Rove M.O.
If you read this story, your career could be over by the end of the day: Michael Paradies Shoob examines 'Bush's Brain' 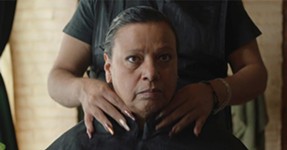