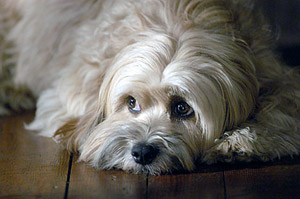 Benji: Off the Leash!

Has it really been 17 years since the last Benji movie hit the theatres? The clock on the clubhouse wall says yes, it has; and now at long last, writer/producer/director/auteur Joe Camp is back, right where he left off – which is not 1987, but somewhere more midcentury, an America suspended between Frank Capra and Andy Griffith, a simpler time when folks knew right from wrong, and a boy could run barefoot in the woods behind his house, and everyone knew the sheriff by his first name. Now, let's be honest: You're not going to go see this movie unless you absolutely have to – a 6-year-old to entertain, a very bad day at the video-rental store, an intercontinental flight on a sadistic airline – and I'm not going to try to tell you you should see it. The sentiment is saccharin; the plot is … well, let's be generous and say unambitious: a boy, a dog, a villain, a pair of slapstick dogcatchers, a contest to find "the new Benji," all is lost, all is saved, a family is reunited, a star is born. It's very missable. But I will say this: Joe Camp is one hell of a classic filmmaker. In his best scenes (the ones with just the dogs, of course), Camp makes you absolutely believe in Benji and Shaggy; without any words spoken, you can tell what they're feeling, and what they're plotting. More than one reviewer has marveled at how Camp got such emotional performances from his canines. It's nonsense, of course. The dogs are cute, but the "performances" – the emotion and the meaning – are built up very carefully with the basic building blocks of the cinema: images and editing, classical montage with nary a special effect in sight. It's beautiful work, really, of a craftsmanship rarely seen these days, and reminiscent of the masters of the form – names like D.W. Griffith, Sergei Eisenstein, Kurosawa, Hitchcock. All actors are cattle, Hitchcock supposedly snorted. Camp proves his case, with a twist.