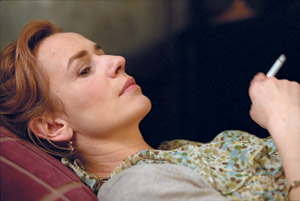 This modest French-language film follows the time-honored cinematic tradition of plot as spearheaded by a simple twist of fate. Case in point: Had Anna (Bonnaire) gone six doors down to the left, as instructed, she might have endured years of psychoanalysis and prescription drugs. But Anna, a bit of a ditz when it comes to directions, goes right instead of left and winds up not at the office of Dr. Monnier (Duchaussoy), her new psychoanalyst, but at the office of a mild-mannered, meticulous tax attorney named William (Luchini). The misunderstanding isn’t readily apparent – William is used to weepy clients undone by death and divorce – but his eyes do go a little buggy when Anna begins to unload about her marriage’s failed sexual relations. She’s gone before William can rectify the situation, but then, he’s not entirely sure he wants to; she’s a welcome intruder into his staid life of taxes, hot tea, and microwave dinners. Their "sessions" continue weekly, and while William’s deception could come off as creepy, Luchini imbues him with such compassion that it’s obvious he genuinely wants to help the distraught Anna. What develops between them is a curious relationship that swings from bracing honesty to impenetrable secretiveness – hers, not his – which begs the question, can she even be believed? When William himself begins to consult with Dr. Monnier, the good doctor brings up the valid point that Anna may very well be deranged, or at the least simply teasing William. (The film’s mild suspensefulness is encouraged by a minor-key score and sly hints of Anna as a film-noir femme fatale.) Who Anna is or isn’t borders on irrelevancy; more to the point is the mutual awakening these two springboard in each other, their collective jolt out of immobility. Theirs is a low-key, unconventional, and utterly beguiling love affair of sorts, movingly rendered by Jérôme Tonnerre’s highly verbal script and expertly enacted by leads Bonnaire and Luchini. Bonnaire’s radiance seems to grow with every visit, till film’s end when she’s practically piping uranium out of her pores, so luminous is she, while Luchini’s snail’s pace progression is charted in the loosening of his necktie and in a giddy impromptu dance to Wilson Pickett. Leconte peppers his film with lovely and astonishing little moments such as this, moments that translate into something surprisingly edge-of-seat and, ultimately, sighingly romantic. 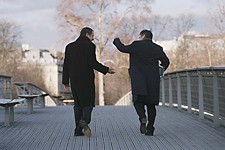 My Best Friend
An antiques dealer is more at home with his silent artifacts than with his fellow Parisians, until a cabbie teaches him the basics of social interaction. 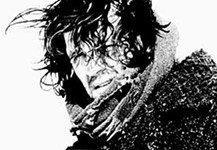 The Widow of Saint-Pierre
On a dreary, wind-ravaged island in 1859, an innocent man is killed by two sailors. Drunk silly, they jab a knife in him to determine ...