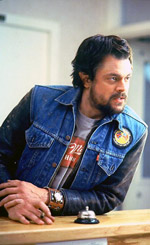 From the "You Can’t Make This Stuff Up, Folks" files comes this take on how Gram Parsons’ body went missing and reappeared a few days later in the desert, half-cremated. For the uninitiated, Parsons was a Seventies country cult hero, member of the Flying Burrito Brothers and the Byrds, pals with the Rolling Stones and Emmylou Harris, and the granddaddy of the alt.country movement (though Parsons himself chafed at categorization; his proposed designation, "American cosmic music," never caught on). Story goes, Parsons and his road manager/best buddy Phil Kaufman made a pact that whoever went first to that great cosmic beyond could go knowing the other would take his body to Joshua Tree (150 miles outside of L.A.) and burn it. The hard-living Parsons died first, at the age of 26, of an overdose, which is the jumping-off point for Caffrey’s film. Parsons (played briefly by Gabriel Macht) appears only once in the film, and then only as a ghost (or an alcohol-induced hallucination); Grand Theft Parsons isn’t really about the musician, but rather the journey that Kaufman (Knoxville) makes in order to fulfill their pact. Along the way, he borrows a peacenik hearse and its hippie driver (Shannon), cons LAX employees into handing over the coffin, and dodges several pursuers, including the cops, Parsons’ stepfather (Forster), and Parsons’ money-grubbing girlfriend, Barbara (Applegate). Knoxville, in his first dramatic role, does what he can with script and direction that aggressively eschew any insight into Kaufman’s grief; the actor must define Kaufman’s head space largely through long, blank stares out the car window and long, sullen drags off his beer can. He, at least, doesn’t make a mockery of the material, which is more than can be said for Applegate, who takes the term "shrieking harridan" to cringe-inducing new depths. Character actor Michael Shannon has some funny bits as Kaufman’s hippie (and unwitting) accomplice, but his role also contributes to the sense of "madcap"-ness that ultimately undoes this misguided film. Black comedy can be a beautiful thing, but Grand Theft Parsons consistently misses that mark for a more bottom-feeding tasteless and broad, with the occasional ham-handed, soulless stab at sober reflection. The real-life premise, though eccentric, is really rather moving. Too bad what Caffrey and screenwriter Jeremy Drysdale dish up is something more like a road-tripping Weekend at Bernie’s . 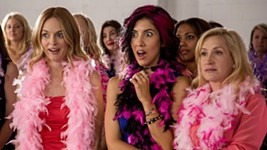