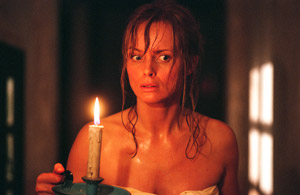 If you’re like me, then you’ve probably been saying to yourself, "Gosh, where on earth can I find a horror movie that features dead maggot babies and poorly executed demon dogs now that Lucio Fulci has vanished beyond one of the seven doors of death?" To your immense relief, perhaps, even I’m not like me these days and so director Renny Harlin’s abysmal take on the once and future king of Catholic horror shows comes not as a welcome return to past gories of Linda Blair and her horny, Beelzebubian pals but as a limply over-the-top exercise in bad taste that even a young Peter Jackson might have found ridiculous. Much more fun to speculate on is the film production’s backstory, which, the grapevine tells us, had no less than the great Taxi Driver scribe and Cat People director Paul Schrader at the helm. Apparently, Schrader’s original version, which was by all accounts in the can and ready to rumble, was nixed by the suits at Warner Bros. (this after the even greater John Frankenheimer had taken a stab at it and promptly keeled over dead) due to a stunning lack of icky bits and a too-cogent script. Enter the Harlin, who with the aid of a newly punched-up script from writer Alexi Hawley, retooled William Wisher and Caleb Carr’s original draft to include more, let’s not mince words, utter crap. As it stands, however, whatever good emerged from Schrader’s original film is for the most part lost amid a flood of silliness and capped by a finale that gives new meaning to the word asinine. Skarsgård, to his credit, acquits himself more than admirably as the young Father Lancaster Merrin (played in William Friedkin’s original 1973 shocker by Max von Sydow) – here a nonpriest felled by the one-two punch of fine Irish whiskey and those eternal cinematic bugaboos the Nazis – who is called in to investigate the discovery of an ancient church found buried up to its steeple in the North African desert. Turns out, as it so often does in these situations, that Merrin stumbles on the exact spot where Lucifer hit the ground after ticking off God all those years ago. To paraphrase Glenn Danzig, evil never dies, it just bides its time until it can get an onscreen "written by" credit. There’s the kernel of a good film here or, at the very least, an entertaining one, but it’s likely only played as If Lucifer Fell, starring Ben Stiller as a roving dybbuk and Sarah Jessica Parker as the quirky East Village rabbi who makes his bar mitzvah dreams a reality. Harlin’s version is, instead, a lot of noisy tomfoolery that never coalesces into a solid horror yarn, lacking even the beloved pea soup ’n’ rotating noggins that made us quake way back when. Sloppy, confusing, and dull as a dented crucifix.