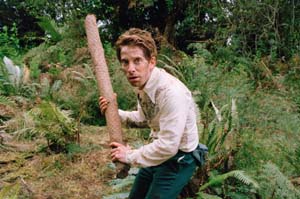 Following the sudden death of their childhood buddy, the three surviving grown pals set off on a mission to fulfill one of their boyhood dreams: the hunt to find the cash that went missing when notorious plane hijacker and extortionist D.B. Cooper parachuted out into the Oregon wilderness and was never heard from again. Faster than you can say, "May he rest in peace," the threesome light out into the wilderness for their male-bonding experience – but not too much male bonding, if you know what we mean. In fact, these characters’ obsession with proving their heterosexual physical boundaries practically – um – gives rise to a whole other meaning of the title Without a Paddle, implying that these wooden navigation appendages and their metaphorical anatomical counterparts are indeed the real subjects of this movie. The vast majority of Without a Paddle’s gags have their basis in a fear of homosexuality and impotence, including the movie’s biggest laugh-getter, which requires the threesome to spoon together naked for warmth. The inclusion of Burt Reynolds in a minor but key character role also underscores this movie’s wishful lineage to the Mount Olympus of all male-bonding-in-the-wilderness fright fests: Deliverance. Along the way Jerry (Lillard), Dan (Green), and Tom (Shepard) also encounter rushing rapids, a bear who adopts Dan as her cub, a couple of demented hillbilly pot farmers (Suplee and Benrubi) and two tree-hugging, au naturel hippie gals (Blanchard and Moore). The plot of Without a Paddle aims for jokes rather than realism, and the three leads and the New Zealand scenery that stands in for Oregon are all likable enough to sustain the movie. But for all the movie’s stoned humor, the story’s conclusion seems rather two-faced (as in smoking one’s pot and eradicating it, too). Director Brill makes no stylistic advances from his recent work with Adam Sandler (Little Nicky, Mr. Deeds), and shows no signs of seeking growth or improvement. Without a Paddle just wants to stroke our funny bone.