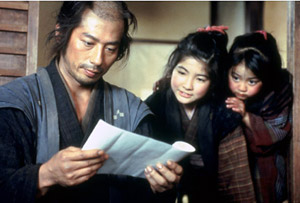 If you’re looking for an epic and blood-drenched ronin movie fraught with dozens of sweeping sword-fighting set-pieces, debased honor, and the stinging ring of swooping kata on bone, you might want to sit this one out. But then, of course, you’d be missing a near-masterpiece of cinematic subtlety and that rarest of exports: a samurai film in which the melees arrive almost as afterthoughts, and a picture-perfect glimpse inside the day-to-day life of an Edo-era swordsman. Twilight Samurai, an Oscar nominee for best foreign film, gives us the seemingly commonplace existence of Seibei Iguchi (Sanada), the mild salaryman of the hour, who is both a down-at-the-heels samurai scoffed at for his heady body odor (surely a sign of a good day’s work well done) and a family man utterly devoted to his two daughters, Kayano (Itô) and Ito (Hashiguchi), and his elderly, mentally impoverished mother (Kusamura), who often doesn’t recognize her own son. Seibei spends his days working not on the battlefield, but as a clerk, as stoic and unemotional as a small and pitted stone at the bottom of a great wall. Even the humblest of constructions requires a cornerstone, however, and Seibei, having recently been left a widower with the passing of his beloved wife, is just that. Sanada shows us the samurai reimagined (and potentially more accurate) as father, husband, and average Joe, and although there are a pair of rivetingly staged explosions of swordplay in Yomada’s film, Twilight Samurai is the flip side of the genre: elegiac and gentle and as full of life and family, especially when compared with the more crowd-pleasing samurai pictures stuffed with their arterial freshets and glinting steel. When an old flame of Seibei’s reappears following the death of his wife and restores his lease on life and presents him with an unexpected and worrisome situation involving her own troubled relationships (three is even more of a crowd when there’s a samurai involved, apparently), Yomada’s quiet, stately film begins to quicken with the relentless pulse of impending and unavoidable confrontation. Seibei once again discovers a more definitive (and breathtaking) use for both his innate humanity and his prowess with a legendary weapon. The key to enjoying Twilight Samurai is found not by focusing on the thrill of battle – that’s been done so many times and in so many different ways as to be too often something of a bore these days – but instead focusing on Seibei’s achingly normal home life. He dotes on his daughters and fashions bamboo cricket cages in his spare time; he has the look of a man whose heart lingers in a permanent twilight, freighted with the banal, struggling to make ends meet in the most mundane of ways, and inexorably drawn into a situation beyond his control but not beyond his understanding. Seibei’s restless existence is complemented wonderfully by cinematographer Mutsuo Naganuma (he also shot Shintaru Katsu’s sightless swordsman epic Zatoichi) who infuses the film with a gray and somber pall that mirrors Seibei’s own wounded soul. This is a determined, resolutely paced, and atypical samurai movie, more an epic of the heart than of the battlefield, and all the more powerful for it.