Last Flight Out is produced by World Wide Pictures, the "film ministry of the Billy Graham Evangelistic Association," as their Web site helpfully and succinctly puts it. This will likely mean one of two things to potential audience members: Either you're a member of his flock in good standing and need a respite from the Hollywood slurry, or you're a curious layman interested in seeing what the good reverend is up to these days. Of course, there's also the (admittedly slim) possibility you're a three-shrouds-to-the-wind goth out on a lark and so bleary-eyed on absinthe shots and Shelley quatrains that you've stumbled into the wrong theatre in search of The Crow IV only to find your wicked, wicked soul confronted by 90 minutes of evangelistic proselytizing and limp character development. Well, hey, "God is in the house," as Nick Cave says – relax and enjoy it. (In any case we've nailed the doors shut behind you.) For the rest, however, this feature-length morality play may be more than what we feel we should have to endure. The story involves godless sinner and high-flying repo-man-on-the-mend Dan (Tyson) piloting into a section of the remote Colombian hinterlands controlled by "narco terrorists connected to Al Qaeda" in order to rescue his long lost love Anne (Phillips), now a medical missionary selflessly committed to aiding the region's indigenous peoples. With help from her beneficent fellow physician Mateo (González) and while on the lam from bullhorn-happy drug lord Salazar (Moreno), Anne slowly brings Dan into the fold while simultaneously teaching the presumably heathen village youths that proper oral hygiene is a key ingredient to a happy, healthy life no matter how far you may be from the nearest Mentadent kiosk. Last Flight Out is by no means a pure disaster of a film; from acting to cinematography to editing, director Jameson – who helmed 1975's Charles Whitman exposé, The Deadly Tower – has assembled as righteous a collection of mediocrity as conceivable, with few outright misfires but just as little in the way of originality. Jameson's been laboring in the Aegean stables of television just lately and it shows: Last Flight Out has the look and feel of a Christian Broadcasting Network movie of the week, replete with an interracial, international cast of smiling do-gooders and One Bad Dude who by film's end will be basking in the warm fuzzy light of redemption like a baby harp seal on a Xanax floe. The film's chief and most ironic drawback is how closely it mimics the cookie-cutter clichés of the standardized Hollywood action film, when, one presumes, it was created as a spiritually healthy alternative to such fare. By aping those graying genre tropes so faithfully, Last Flight Out manages the rather remarkable feat of being neither alternative nor all that useful as a proselytizing tool. Ladies and gentlemen, God has left the building. 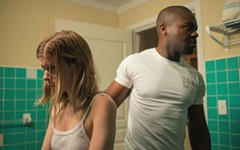