Lacking the sly mordancy of the Warren Zevon song for which it’s titled (screenwriter Trevor Preston "borrowed" Zevon’s lyrics for the title of his dark tale of cinema mayhem), I’ll Sleep When I’m Dead is a film-noir outing that snuffs out most efforts to pull it toward the light. The movie begins and ends in darkness and doubt, cloaked in moonlight and muddled questions about who and why and wherefore. This is not such a bad thing, since part of this movie’s appeal comes from the need for each viewer to piece together the characters and plot for him or herself. But a little darkness and confusion can go a long way, and I’ll Sleep When I’m Dead positively revels in its shadows and parallel storytelling, boring forward with its converging storylines toward some point which, if it indeed exists, lies beyond the finish line of this particular movie. As it is, the movie’s concluding shots may lead to some bafflement regarding some of the story’s prior and yet unfinished business – various viewers reach different interpretations of the film’s final moments. The beginning of I’ll Sleep When I’m Dead offers little more clarity and narrative definition. At least a couple of separate storylines are put into motion, and the movie continues on this way before offering hints of convergence. One involves Will Graham (Owen, whose starring turn in director Hodges’ "comeback" film, Croupier, bounced the actor’s career into leading-man territory – see King Arthur as evidence). Will is introduced as a solitary loner, a taciturn woodsman with a bushy, unshaven beard who lives by himself in his camper van in the forest. Like everything else in this story, how Will came to adopt this curious lifestyle is something we learn in general, rather than specific, terms. Meanwhile, Davey (Rhys-Meyers) gads about London, dealing a little coke, bedding lovely women, and pilfering small, desirous items or cash from their handbags while they’re not looking. He’s a small-time hustler and jazz lover, who appears to be well-liked by all, despite his bad habits. On his way home one night, Davey is kidnapped by Boad (McDowell) and his gang, and brutally raped. Davey then goes home, gets into a full tub with all his clothes on, and is never heard from again. How these three men are connected becomes clearer as the story evolves, although there is much that is left unsaid (which is one of the problems with taciturn heroes). Then there is also Helen (Rampling), Will’s former girlfriend, a restaurateur, whose presence is another cipher to solve. Each one’s feelings for the other are inscrutable, and without learning anything of substance about their past or present, the 15- to 20-year age difference between the two becomes a part of our curiosity about them, whether it is meant to be or not. By the end, everything hangs together as much as it needs to or is going to, but the movie’s sadness remains. Ultimately, the sadness is the overriding feature of I’ll Sleep When I’m Dead. While McDowell gets our hearts pumping with some classically nasty McDowellisms, Rampling seems miscast, and Owen allows Will to remain a scruffy enigma. This sad, dark movie moves across the screen like a sleepwalker, aloof and belonging neither to this world nor the next. 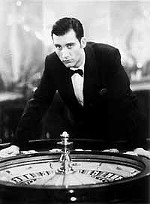 Croupier
“A wave of emotion came over him. He was hooked again: watching people lose.” That's how Jack Manfred (Owen), the titular croupier, views himself and ...