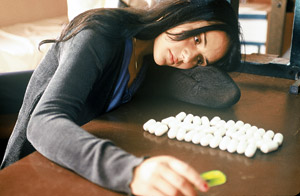 As experienced by the title character, the flip side of the drug trade – specifically the illegal transport of heroin from Colombia to New York City – is a harrowing journey undertaken by those for whom all other avenues are closed. It’s an escape (just as it often is for the end user), ripe with the possibility of financial reward and the possibility of forward momentum. It’s also a good way to get killed, but when you’re 17, pregnant, and stuck in a rut so deep it’s beginning to resemble a grave, that key drawback is less important than the chance of starting over. With her smoky eyes and flowing black locks, Colombian newcomer Moreno could pass for a model, but she plays Maria with a quiet and determined respect. Living in a cramped house with her mother and sister, Maria works during the day stripping the thorns from roses for export. From the first glimpse of her onscreen, it’s clear that she realizes the gravity of her situation. The urge to bolt, to get out, no matter how, is etched like a corona around her. Smart enough to know that her boyfriend’s half-hearted marriage proposal isn’t a bedrock foundation for a lasting commitment, Maria instead heads off from her rural village to Bogotá to look for work. When she’s offered a ride by a charming young man on a motorcycle, she accepts, and when he offers to introduce her to his employer (with the implication that he might offer her some sort of work), things appear to be looking up. In short order, Maria is inducted into the ranks of the mules, those people who swallow condom-wrapped narcotics and traverse borders – physical, mental, spiritual – and are the end result of crushing poverty and El Norte’s insatiable appetite for release. Traveling with two other young women, Blanca (Vega) and Lucy (López), Maria undertakes a journey that is gripping and oddly educational. This may be the first film to examine the intricacies of the Colombia-to-U.S. drug route in any detail: Maria slips through the grasp of American customs agents only because she is pregnant and they cannot X-ray her, and once safely ensconced in Queens’ Colombian immigrant community, the country she sees out her window is nearly as shabby as the one she left. Marston’s film is undeniably powerful, straightforward, and in possession of a gritty kind of terminal beauty that’s arresting to the eye even as the storyline goes from grim to grimmest. It may be seen as a cautionary tale, but ultimately, Maria Full of Grace is a film about communities and havens and the lengths people will go to find their own place in the world, no matter which side of the law it may rest on or how many hells they may have to pass through on their way there.