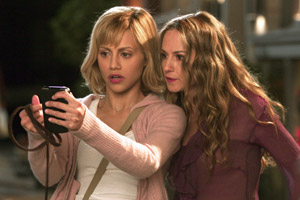 Little Black Book immediately posits itself as a not-your-run-of-the-mill romantic comedy with a quotation (from The Tempest) that prefaces the film: "Hell is empty, and all the devils are here." It’s a bold, brassy opening salvo – them’s fighting words, one nods appreciatively – but that’s about the last hint of sass in this unneccessarily mean-spirited and misguided film. Murphy, whose career began promisingly with character parts and has since plummeted into professional ditzdom, brings her patented giggling, googly-eyed routine to the part of Stacy, a Diane Sawyer-wannabe who works as an associate producer at a trashy talk show hosted by falling star Kippie Kann (Bates). Stacy also has what appears to be a perfect relationship with Derek (Livingston), a pro-hockey scout – perfect, that is, until Derek goes out of town and leaves behind his Palm Pilot. Egged on by a Machiavellian co-worker (played by Little Black Book’s only bright spot, Holly Hunter), Stacy starts trolling around Derek’s Palm Pilot, finding pictures and stats of ex-girlfriends she’s never heard of. And so begins a slippery slope that ends with Stacy moaning that, somewhere along the way, "the line between right and wrong had blurred." Call me naive, but when posed with the question, "Should I betray my boyfriend’s trust by rifling through sealed boxes, erasing phone messages, and interviewing his exes under false pretenses?" I don’t really see a whole lot of gray area. Part of the problem is that scripter Melissa Carter wants to have it both ways, by first exploiting Stacy’s deceptions for comic fodder, then yanking the rug out and demanding she – and we – learn a lesson from her wicked ways. It doesn’t help that the tenor of Stacy and Derek’s relationship is inadequately established (they share a brief, seemingly idyllic couple of minutes together, then Livingston is shipped off for most of the movie) and that Stacy’s psychological makeup consists of the contrived, movie-ready quirk that she gets her spiritual guidance from the song catalog of Carly Simon (which forces one of the film’s most wincing moments – Academy Award-winner Holly Hunter awkwardly dancing to "Let the River Run"). Nope, Little Black Book isn’t your run-of-the-mill romantic comedy – it’s much worse – and, rather disgustingly, the devils on earth it unmasks are all female and vindictive. The Dead Girl
The filmmaker and an all-star cast create this somber murder mystery that has little mystery but is filled with a deep foreboding about the anguish that dominates some women's lives.