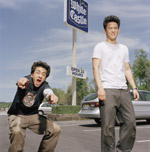 Leave it to the eggheads at The New York Times to walk away from Harold & Kumar Go to White Castle, the latest stoner comedy from the director of Dude, Where’s My Car?, with the conclusion that the "slaphappy conventions of youthful lowbrow comedy and the easy inclusiveness of consumerism conspire to dispel the stale clouds of identity politics" – a theory that simply demands the question, "Dude, Where’s Your Sense of Humor?" In fact, the piece’s author, A.O. Scott, makes a compelling argument that the film represents a sort of multiculturalization of the stoner genre (the title’s Harold and Kumar are, respectively, Korean-American and Indian-American), and that, even more interestingly, though that multiculturalization may provide a wellspring of humor, any indignation or social instruction is served up mostly on the sly. First-time writers Jon Hurwitz and Hayden Schlossberg poke the issue of racial identity just hard enough to land an equal-opportunity punchline. Everybody – from cops and white-boy extreme-sport junkies to Jesus freaks and the buttoned-up kids at the Asian-American campus organization – is sacrificed to the altar of the almighty laugh. And, all intellectualizing aside, Harold & Kumar Go to White Castle consistently nails that laugh because it is, quite simply, good, dumb, stoner fun. At least, the humor is dumb; the heroes, quite refreshingly, are not. It’s Friday night, and roommates Harold (Cho) and Kumar (Penn) unwind in their Hoboken apartment with a bong and cable TV. It’s been a rough day for the both of them: Uptight Harold, a junior investment banker, suffers regularly from the bullying of his fratlike co-workers, while the more laidback Kumar, in his ongoing effort to resist the career path chosen by his family of doctors, had to botch another medical-school interview. Good and blitzed, the buddies decide to go in search of the perfect food – White Castle sliders, of course – which entails a trip to nearby Newark. The deceptively easy drive enacts a calamitous butterfly effect; riotously funny roadblocks to White Castle include a frothing raccoon on the offensive, a backwoods tow-truck driver covered in pussing boils (Meloni), a carjacking from Doogie Howser (Harris, playing himself), and a bareback, moon-lit ride on top of a cheetah (in front of an atrocious blue screen that just adds to the film’s doofy charm). As the night wears on, Harold and Kumar find themselves in loonier and loonier situations, but what grounds the film, always, is the likableness of leads Cho and Penn. You don’t just root for Harold and Kumar to get the girl, get the weed, and, above all, get the burger – you want to hang out with them while they’re doing it, and see if they’re free next Friday night, too. 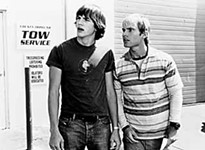 Dude, Where's My Car?
Not since Scott Baio used his wacky telekinetic powers to disrobe a chesty Heather Thomas in the 1982 teen sex comedy Zapped! has there been ... 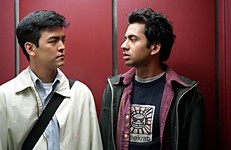