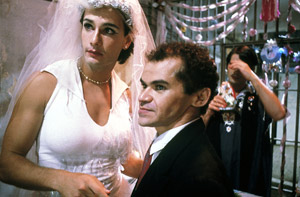 Carandiru, the new film from Hector Babenco (Kiss of the Spider Woman), opens with a remarkable satellite photo of São Paulo, Brazil, where the film takes place. That simple, ethereal shot sets the stage for the rest of the film, as the camera forsakes its heavenly perch and plummets into the muck and mire of Carandiru, the city’s notorious penitentiary. Like São Paulo itself, a place so overcrowded with humanity in all its myriad forms, Carandiru is, as the film opens, housing far more convicts than it was meant to. Babenco thrusts us into the film’s action without a moment’s notice, as a pair of prisoners attempt to psyche each other out before their big shiv battle. One, Lula (Dionísio Neto) is convinced that another, Dagger (Milhem Cortaz), is guilty of murdering a family member. Like most prisons (or at least most dramatically adapted prisons, the real power over day-to-day life lies within the inmates, as a strictly codified hierarchy of near-medieval proportions serves to make life inside those gray walls, if not altogether better, at least a shade more bearable. In the case of Lula and Dagger, the mediator is an older, presumably wiser, con named Ebony (de Almeida), who chastises the men for brawling (and attempted murder) on the same day the new prison doctor (Vasconcelos) arrives to screen the populace for infectious diseases, chief among them AIDS. American viewers of Carandiru may be tempted to liken it to a south-of-the-border Oz (the HBO prison drama, not The Wizard of …), but Babenco’s cool, detached camera and multilayered storylines, of which there are many, rise above the clichés of the men-in-prison genre by simple dint of narrative power. A scene in which a revolving variety of prisoners sit down with the good doctor to be grilled about their sexual habits and IV drug use feels a bit like a lift from Trainspotting – but unlike that dark slice of humanized inhumanity there’s no comedy allowed behind the walls of Carandiru, only slow deaths by AIDS and TB and a kitchen knife to the belly. And then there’s Graça’s Highness, the all-powerful drug kingpin who manages to ooze both gutter panache and soiled evil in a single glance of his eyes; the fact that he’s also the only prisoner to have two competing wives on the outside makes matters even more unpalatable (for both himself and the other inmates). These and several other characters are given a chance to tell their woeful stories, in flashback more often than not, to their attending physician, who, audience surrogate that he is, listens intently as skein after skein of horrific backstories are unwoven for his ears alone. Carandiru is loosely based on a true story – the real-life prison is now vacant and shut down – but with performances so gritty you feel as though someone had put sand on your popcorn in lieu of salt, it has the resonant feel of myth, buoyed by simultaneously vicious and compassionate performances from the men on both sides of the bars.