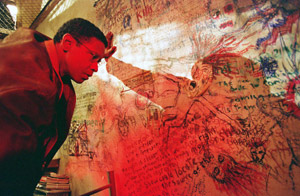 The movie blasts into its starting place on a shrapnel-storm of music. The sound is the first thing you notice about The Manchurian Candidate. "It ain’t me, I ain’t no fortunate son," wails the chorus of John Fogerty’s old Creedence Clearwater song, reworked for this film by Wyclef Jean. We shouldn’t be surprised: This is a Jonathan Demme film, after all, and thinking back to John Cale’s score for Demme’s Corman exploitation film Crazy Mama and the director’s most recent film The Agronomist, a documentary about Haitian activist and radio deejay Jean Dominique, we’ve come to expect each new Demme film to percolate to an urgently musical beat. (The Manchurian Candidate also features a few cameos by musicians as diverse as Robyn Hitchcock and Fab 5 Freddy.) "It ain’t me, I ain’t no senator’s son," continues the song. Too bad for Raymond Shaw (Schreiber). He is a senator’s son, and as the movie opens, he’s out on patrol in Kuwait during the Gulf War of 1991. The Manchurian Candidate is a smart update of the 1962 political thriller of the same title, which was brilliantly directed by John Frankenheimer and stars a perfect triumvirate of Frank Sinatra, Angela Lansbury, and Laurence Harvey. Both films are based on the novel by Richard Condon, but where the original film seethed with Cold War paranoia, the Communist menace, and the threat of brainwashing, the new film transposes these fears to modern times and emerges with a darkly paranoid thriller whose villains are insidious multinational corporations, self-serving political power mongers, and one particular fugitive biogeneticist from South Africa whose methods of brainwashing have been updated as surgical implants. The original film and its script by George Axelrod were so of their times and so note-perfect, that it has long been considered blasphemous to even consider retouching them. Furthermore, Demme’s recent misstep with The Truth About Charlie (his remake of Charade) raised fears that not only was an already near-perfect movie being remade, but also that it was being remade by the wrong person. However, Demme and screenwriters Daniel Pyne and Dean Georgaris have surprised even the most fearful, so banish any qualms you might be harboring (if such a directive can be issued with a straight face while discussing brainwashing). The plot is a tightly wound thriller about half-remembered dreams, unbridled political power, and surreptitious world dominion. A multinational private equity fund called Manchurian Global functions as a Halliburton-like company, providing "services" to military and political operations. The company is a heavy financial supporter of Sen. Ellie Prentiss Shaw (Streep), mother of Raymond Shaw, who has been elected congressman from the state of New York since his return from the Gulf. Their dream is to one day place a sleeper agent in the White House. Maj. Marco (Washington), who commanded Raymond Shaw’s detail in Kuwait, has remained a military professional since his return but is troubled by incompletely remembered dreams that become aggravated when he learns another soldier from their unit is suffering from similar dream disorders. It’s odd, after a career that has highlighted the forcefulness of his screen persona, to see Washington playing a character so psychologically whipped and fragile. At times, Maj. Marco’s suffering is so extreme that the audience and the characters with whom he comes into contact cannot tell if he is truly deranged or, as the government says, a victim of Gulf War Syndrome. The film’s performances are spectacular: Streep already sets the bar for the female performance to beat come next year’s Oscars and Schreiber’s controlled passivity is an impressive thing. Streep’s nuances and the screenwriters’ twists also remove much of the misogyny of the original film’s depiction of the über mother. Other changes, such as the new film’s ending coda and the brain-drilling science fiction aspects, are less successful transpositions. Nevertheless, this new Manchurian Candidate marks a real revitalization of the political thriller, and with its plot climax occurring in conjunction with an American presidential election, the film could not be any more "of the moment" and cautionary.