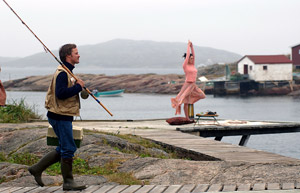 Calling Doc Hollywood. Some filmmakers have hijacked your plot and reset it on a remote island of Quebec. It stars a bunch of French Canadians instead of Michael J. Fox, but otherwise the story of a community pulling together to snare a full-time local doctor is pretty much the same – especially in regard to both films’ mediocrity. In both cases, the doctor in question is a plastic surgeon who, for reasons beyond his control, is stuck for a time in a remote outpost and while there becomes the object of the townspeople’s underhanded ruses to lure him into permanent residency. Seducing Doctor Lewis also owes a few debts to films like Waking Ned Devine, in which an entire village is the film’s real protagonist, and Big Fish, in which all of life becomes a metaphor about snagging the legendary one that got away. Yet the film would play better had it been a Forties comedy rather than a contemporary one, as it uncomfortably stretches the confines of what we accept as realistic in this day and age. The isolated fishing village of Ste. Marie-La Mauderne is dying, along with their livelihood. Their fishing stock is depleted, and as the town becomes more and more run down and the residents’ only income derives from their weekly welfare checks, more and more people move away or stick around and simply give up. A factory has expressed interest in moving to the village but requires it to have a full-time doctor. Thus the inhabitants scurry about town trying to make Dr. Lewis’ one-month visit last a lifetime. They hear he likes cricket, so they all try to learn the sport despite their deep dislike of the activity. They tap his phone so they can learn his wants and desires. They even go so far as to swim underwater to hook fish on his otherwise unbiting line and place cash daily underneath a stone leading up to his house. The community effort required to create this elaborate ruse ultimately gooses the citizens’ civic pride and feeling of self-worth that had long ago been erased by the steady stream of welfare checks. Much of this is very sweet and funny, but frequently the whimsy goes too far and you just wish for it to end. This is director Pouliot’s first film, so perhaps some of his excess cuteness can be overlooked. But then again, maybe not. As the saying goes, "This ain’t brain surgery."